From June 1, E-passes will not be required for inter and intra-state movement 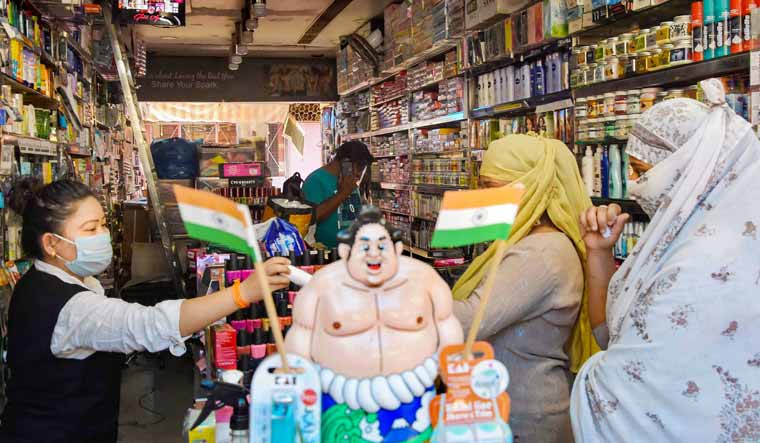 Bhopal: Women buy cosmetic items at a shop after the district administration allowed traders to open their establishments in a phased manner amid the ongoing COVID-19 lockdown | PTI

Right on the day that ‘lockdown 4.0’ ended, the number of positive COVID-19 cases in Madhya Pradesh crossed the 8,000-mark while the death toll touched 350. Meanwhile, Chief Minister Shivraj Singh Chouhan announced opening up of entire state, except for shrunken containment zones, from June 1.

The lockdown will continue in containment zones, which will be decided on the basis of areas, localities or villages that are worst-affected, until June 30. All activities except essential services will remain prohibited there, the chief minister announced.

In addition, the requirement of e-passes for inter-state and intra-state movement has been done away with from June 1—meaning state borders will be open for movement. However, inter-state buses will not operate till June 7.

Madhya Pradesh had only nine positive cases and had not reported even a single death by June 24, when the lockdown was first announced. The unlocking comes at a time when the positive cases have risen to 8,089 and the death toll is at 350 and 51 out of 52 districts are affected by the pandemic. On the positive side, 4,842 patients (60%) have recovered from the infection, leaving only 2,897 active cases in the state.

Madhya Pradesh seems to have adopted the central guidelines for easing the lockdown (‘unlock 1.0’) in toto, as the chief minister announced that while economic activities will commence across the state (except containment zones) from June 1 in phased-manner, religious places, places of worship, shopping malls, hotels and restaurants will open from June 8.

However, educational institutions like schools, colleges, coaching and training centres will open only in July after consultations with all stakeholders including parents he said.

Shops in Jawad town of Neemuch, where a cluster of positive cases was recently reported, will remain totally closed. In the rest of the state, 100 per cent of shops will open in a regular manner from June 1.

The chief minister warned that the COVID-19 crisis is not over yet and people should strictly follow the norms like physical distancing, wearing masks in public places, public transports and offices, not spitting in the open and washing hands regularly to prevent infection.

The ex-chief minister and chief of MP Congress Committee, Kamal Nath has, however, come down heavily on the state government, saying that while it is deciding to open up economic activities from June 1, there is no strategy or preparation to prevent further spread of COVID-19 pandemic. Rather, the state government is focused on the preparations for by-polls (for 24 vacant seats in State Assembly).

“Leaving the people to fend for themselves, the government is busy in preparing strategy to win by-polls and all the decisions are towards this end. Rather than doing relief and preventive work in COVID-19 affected areas, the focus is being kept on the by-poll bound areas,” Nath said in a statement.