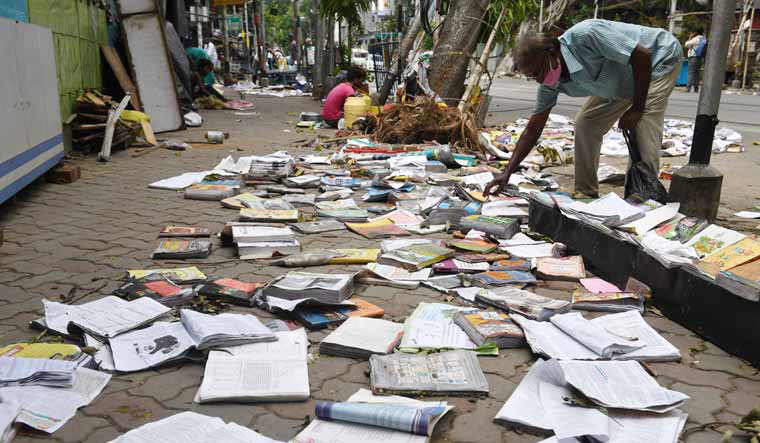 A bookseller in College Street, Kolkata, lays out books to dry, in the aftermath of the cyclone Amphan which tore through the city last week | Salil Bera

The internet is flooded with images of ravaged books drying out on pavements and tram tracks in College Street—Kolkata's iconic stretch for quaint bookstores which, some believe, is home to the largest book-market in India. Rough estimates by the Publishers and Booksellers Guild peg losses caused by the devastating cyclone Amphan, at Rs 5 crore.

There are several fund-raising campaigns and relief efforts being organised by university students and alumni to save the famous "boi-para"—a singular hub for second-hand books, rare tomes and exam guides. For anyone with a penchant for old, dog-eared books, College Street is hearth and home. To prevent booksellers and publishers from abandoning their soaking wet books as raddi or waste, a not-for-profit initiative called 'Books Don't Die' has tied up with a specialised e-commerce website to deliver damaged and partially-damaged books from the cyclone-hit College Street.

"The idea came from a Facebook user lamenting the loss of so many books in College Street," says Tuhin Mallik, founder of Boighar.in, an e-commerce website for Bengali books set up in the latter part of 2018. "He wondered if there was a way to buy those damaged books so it can be cherished as a keepsake," says Mallik whose website has close to 8,000-plus listed titles of Bengali books and 'Little Magazines', newly published by big and small presses. (For the uninitiated, Little Magazines have an illustrious history in Bengali literature where they offer alternative, more intellectually stimulating content from smaller presses when compared to mainstream, big media magazines).

"That suggestion on social media spurred an idea to go beyond donations. Especially for smaller College Street booksellers who could not travel from the suburbs to prepare for the cyclone during lockdown," says Mallik who then collaborated with Susnato Chowdhury, researcher, writer, editor and publisher of the Bengali Little Magazine Bodhshabdo which is also available on Boighar.in. Together they have forged a joint-initiative to reach out to publishers and booksellers to list titles and authors of damaged books, on Boighar.in, apart from stating its condition: whether partially damaged but readable or completely damaged. Visitors to Boighar.in can then order these books online at reduced rates—about 55-60 per cent less than the printed price for completely damaged to 35-40 per cent discount for the partially damaged.

"The only extra cost will be for shipping and packaging. The rest of the amount will be directly transferred to the sellers and publishers," says Mallik, who, with his logistics team, has delivered more than 10,000 Bengali titles all over India, pre-lockdown. With "Books Don't Die", Boighar hopes to start selling older, rarer books, apart from damaged textbooks and second-hand titles recovered from the cyclone.

"When I reached out to the booksellers, most of them could not believe that there are people who want to pay for these damaged books," says Chowdhury, who was amazed to see the response from interested readers when he proposed the idea on his Facebook page. He will set about collecting the books physically now, after some 40 publishers and bookstore owners have agreed to list titles of damaged books on Boighar.in. Some of these titles include Bangalir Mistanna – Gautam Bhadra (Sutradhar) [Sweets of Bengalis]; Mahapayaramrito Geeta – Biswadev Mukhopadhyay (Bhasalipi) [Geeta in Verse]; Kabita Samagra (2) – Bhaskar Chakroborty (Bhasabandhan) [Total Collection of Poems (Part 2)]; Medhajeebeer Daay – Edward Said (Sahaj Path) [Representations of the Intellectual]; Malay Roy Choudhury-r Kobita - Malay Roy Choudhury (Avishkar Prakashani) [Collection of Poems], apart from textbooks in various languages.

"This is not relief work. By selling these damaged books, we want to give people something to keep as memorabilia and restore a sense of dignity for the smaller booksellers," says Chowdhury, who is also a columnist and regular contributor to Bengali newspapers like Anandabazar Patrika and Sangbad Pratidin.