Karnataka to open temples from June 1

Temples will be opened for pooja and daily rituals 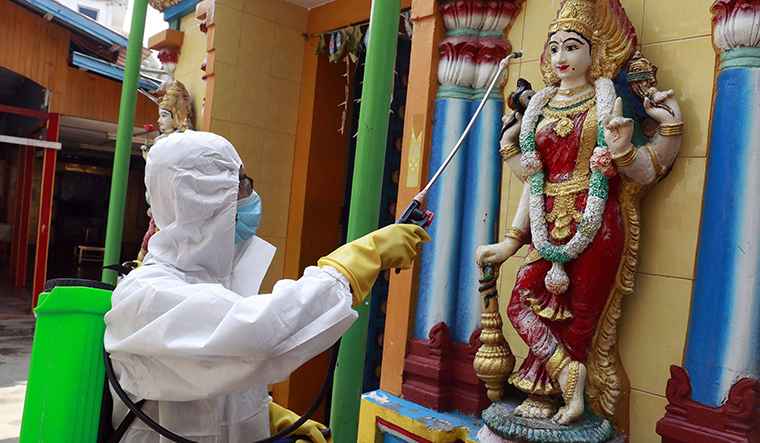 Temples in the state that were closed for devotees for over two months due to the COVID-19 induced lockdown will be opened for public from June 1, State minister Kota Srinivas Poojary said on Tuesday.

"We have had discussions with the Chief Minister regarding Muzrai department, during which it was decided to open temples from June 1," Poojary, the minister for Hindu religious institutions and charitable endowments (Muzrai), said.

Speaking to reporters after meeting Chief Minister B. S. Yediyurappa, he said the plan is to allow all 'sevas' (rituals) at the temples once they open, but depending on the situation, they may limit it to a few.

According to him, as trains, flight services, vehicular movements have started, and hotels likely to resume shortly, several devotees have been demanding opening of temples to offer prayers.

"The temples will be opened to offer pooja and daily rituals, we are not permitting temple fairs and events," the minister said.

There are over 34,000 temples in the state that come under the Muzrai department.

Though the temples are holding daily poojas and rituals, they are not open to public for now, with COVID-19 induced lockdown restrictions in place.

Officials had recently told PTI that the department was planning to have a standard operating procedure (SOP) in place, that needs to be followed at temples in a post lockdown scenario, once they are opened for the public.

Poojary said all temples will be opened and instructions have been given to take preventive measures and make necessary preparations to ensure social distancing before June 1.

"I will discuss with officials and decide on what other measures should be taken so that things go on smoothly, ensuring safety of devotees," he said.

The minister also said that sevas at select 52 temples in the state can be booked online from tomorrow, and the Chief Minister has a given a go ahead for this.

He clarified that all rituals at the temples like poojas and aartis will continue as per traditions, but booking for sevas that can be offered by devotees, can be done online from now on.

Such facilities for online booking of sevas are already available at certain temples and are quite popular, he pointed out.

Recently the Commissioner of Hindu religious institutions and charitable endowments had written to deputy commissioners of 15 districts, also executive officers and administrators of 'A' grade temples, seeking information on sevas offered at temples under their jurisdictions and those for which option can be provided for devotees to do advance booking online.

This was aimed at the development of app and web-based software for the purpose of advanced booking of sevas, the letter said, adding conditional approval had been given to Spiritual Products Private Limited, Mysuru to develop both