The video was shared by a Jaipur resident, who was travelling to Delhi 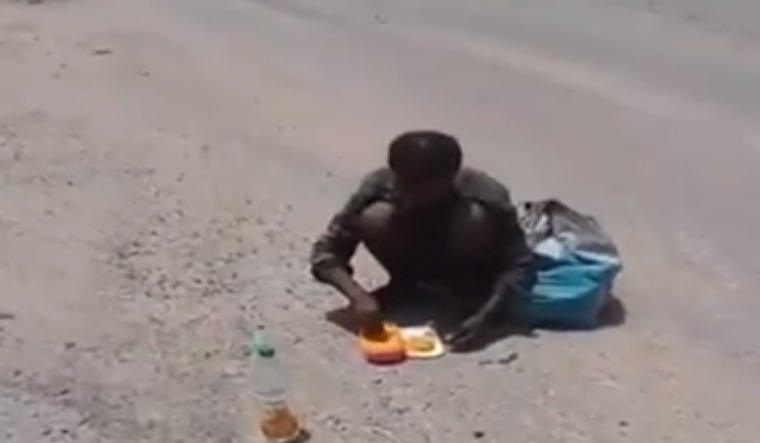 The starving man being fed in Shahpura | Via Twitter

A video is going viral on social media showing the shocking extent to which the coronavirus lockdown has hit the poor.

The video is of a man eating from a carcass, possibly of a dog, on the Jaipur-Delhi Highway.

The video was uploaded on YouTube by Pradhuman Singh Naruka, a Jaipur resident. In the video, Naruka claims he was on his way to Delhi when he spotted the man near Shahpura, which lies in Jaipur district. In the video, which was uploaded on May 18, Naruka asks the man what he was eating and tells him he will die. He then asks the man to move to a spot on the highway near a truck, where he feeds him.

In a Facebook post, Naruka claimed, "Humanity was put to shame in Shahpura when a labourer due to hunger was forced to eat a dog. What is worse is that no person stopped their vehicle and saw the need to help him. I gave him food and water to drink..." Naruka appealed to people to help those in need.

Speaking to THE WEEK, Naruka said the man was possibly a homeless person. He said the incident happened on afternoon of May 18. Naruka added that police officials had contacted him on Thursday, seeking details of the man and the spot where he was found.

Many people shared the video on social media, tagging mediapersons and government officials. Lavanya Ballal, who has been associated with the social media team of the Congress, targeted Prime Minister Narendra Modi over the video. She wrote, "This is beyond heartbreaking. No one deserves this He is eating the carcass of a dead dog. @narendramodi India won’t forget this amount of pain and humiliation heaped of the poor...".

In recent weeks, incidents of deaths of migrant workers walking to their homes and images of their hardship have shocked India. More than 100 migrant labourers have been killed in multiple road and rail accidents across India in recent weeks.