OPINION: Why using the ‘war’ metaphor for fighting the COVID-19 pandemic is dangerous 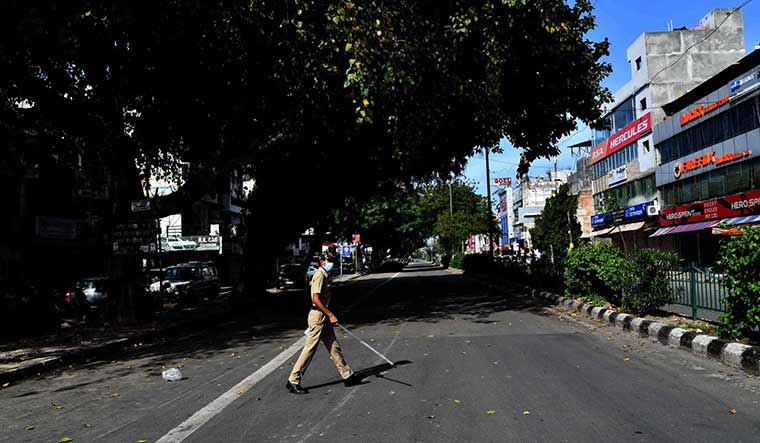 A policeman patrols the street in Rohini | Sanjay Ahlawat

As India and the world fight the COVID-19 pandemic, more and more world leaders are using the metaphor of ‘war’ to deal with this infectious disease. The Chinese premier Xi Jinping swore to wage a ‘people’s war’ on the coronavirus. Donald Trump, the US President, described himself as a “wartime president” of a country that is fighting a “war” against what he called the “Chinese virus”. Likewise, Indian Prime Minister Narendra Modi, while talking about the 21-day national lockdown, invoked the imagery of an 18-day battle from the Hindu epic Mahabharata, saying that India aims to win the ‘war’ against the corona virus in 21 days.

This is not the first time that global leaders have invoked the ‘war’ imagery to describe a situation where there is no military confrontation or actual fighting. Famously, US President Lyndon Johnson in 1964 declared a ‘war on poverty’ in America to bring down alarmingly high levels of poverty rates. Several environmental activists often talk about “wartime-like mobilization” to cut carbon emissions.

Why the ‘war’ metaphor

One can offer four reasons why the ‘war’ metaphor is used while dealing with a global pandemic like COVID-19. First, linguistically, the ‘war’ analogy is a tool to convey the gravity of the crisis even if there is no military confrontation. Since the current pandemic is one of the worst in the last 100 years, the ‘war’ metaphor is powerful to drive home the message that people should take the virus seriously. Second, momentous and exceptionally urgent situations require mass mobilisations of people, resources and other things often at short notices. The ‘war’ metaphor is useful to marshal resources and galvanise people fighting the pandemic.

Third, governments cannot fight a pandemic of this nature without the support of people. Thus, people have to be encouraged to make sacrifices such as locking themselves in their homes for weeks together and giving up on their civil liberties. The ‘war’ metaphor makes people realise the enormity of the situation. Psychologically, it prepares them to make such sacrifices. People tend to think that their sacrifice is their contribution towards their country’s effort to fight a battle. Fourth, in crises, like the current one, people face several hardships-- doctors working in difficult conditions, people staying at homes and not being able to earn their livelihood etc. To alleviate this pain, it’s important to tell people that we all are in the same boat together fighting a common enemy i.e. the virus. The ‘war’ metaphor helps in developing a strong sense of fraternity, thus, perhaps, dilutes the emotional suffering and pain experienced by people.

Problems with the ‘war’ metaphor

Notwithstanding the above reasons, use of the ‘war’ metaphor is problematic for several reasons. First, by invoking the ‘war’ allegory, a powerful political leader may use the situation as a carte blanche to adopt draconian measures with scant regard for humanitarian issues or civil liberties.

For instance, Prime Minister Modi’s announcement of a 21-day national lockdown, with just four hours notice (compare this with the Singaporean Prime Minister announcing a one month lockdown with four days notice) led to a humanitarian tragedy of mass exodus of migrant workers. The endless use of the ‘war’ vocabulary ensured that the humanitarian tragedy didn’t cause much uproar. The ordeal of migrant workers walking thousands of kilometres without food and water, some even tragically dying in the process, was largely glossed over as a small piece of collateral damage to be paid when the nation is fighting a ‘war’.

Second, use of the ‘war’ analogy may also trigger authoritarian streak in democratically elected governments. This streak will be stronger in elected autocrats (those who act as autocrats maintaining a façade of democracy) to use this opportunity to grab more power. Liberal democracies like India and the US allow the political leaders to amass emergency powers to deal with crises. Unlike an authoritarian regime, these powers have to be returned to the society once the emergency is over. But, a constant ‘war’ narrative creates conditions where forces like rule of law and institutions like courts and legislatures are not as effective as they should be to check the excesses committed by the political executive.

Related to this, Israeli historian Yuval Noah Harari argues that the current COVID-19 crisis can be used by governments to entrench a surveillance state. While in the short run, such surveillance may be needed to track the spread of the pandemic, the ‘war’ like crisis may become a convenient alibi to continue using such technologies even in the post-COVID-19 world or when not needed or for other purposes. For instance, many have expressed privacy concerns over the central government’s Aarogya Setu app to track the spread of the pandemic.

Third, the spectre of ‘war’ creates an environment of support and empathy for the government, which allows elected governments to get away with mistakes. This is evident in the case of India. India got its first COVID-19 case on 30 January 2020. By this time, China had already locked down Wuhan and the world was staring at a pandemic. Yet, India failed to see the pace at which the storm was galloping towards her. The argument that the US and Europe also failed is a lame excuse. Today, with more than 9000 COVID infections, India is beset with problems such as not having adequate testing capability, lack of adequate personal protective equipment (PPE) for the health workers etc. No one seems to be asking, why India didn’t prepare for the pandemic in February 2020 when the number of cases was very low. The argument often heard is that in a ‘war’ like situation one should stand in solidarity with the government and not criticise it!

Fourth, a ‘war’ narrative also helps in creating what is known as a ‘rally around the flag effect’, where people unite behind a supposedly ‘strong’ and a ‘decisive’ leader who is seen as singlehandedly fighting the enemy on the behalf of the entire nation. A ‘war’-like crisis provides an opportune moment to perpetuate a cult of personality or the cult of a leader by projecting him as a hero inviting worshipful behaviour and praise from the masses.

Prime Minister Modi’s successful calls for mass activities such as banging utensils and lighting candles, during the on-going crisis, in the name of thanksgiving or solidarity, are clear efforts to immortalize ‘personality-cult’ politics. Likewise, the creation of a new relief fund, Prime Minister’s Citizen Assistance and Relief in Emergency Situations (PM-CARES), despite the existence of the National Relief Fund for more than 70 years to take care of natural calamities; and naming the relief package announced for the poor, hit hard by the lockdown, as the ‘Prime Minister’ ‘Garib Kalyan Yojna’ (poor welfare scheme) are also examples of cultivating a cult of a leader. The noisy primetime news anchors on television are busy heaping praises on the prime minister, conveniently forgetting the hard work being put by several chief ministers.

Finally, an incessant ‘war’ narrative can also be skilfully used to lay all the problems at the door of, well, the ‘war’ itself. As leading journalist T. N. Ninan recently wrote, in the post-COVID-19 world, the Modi government could ver well blame the ‘war’-like COVID-19 situation for the deep economic slowdown that India will experience in coming years. While it is true that COVID-19 pandemic has led to serious economic disruptions, the fact is that the Indian economy was doing quite badly even before the virus caused havoc, with the non-government Gross Domestic Product (GDP) growing at an abysmally slow 3 per cent. The question on whether India would have been able to weather the storm if our economy had been managed well before the crisis, will not be asked.

In sum, it is tempting to equate the fight against the virulent COVID-19 pandemic to a ‘war’ and to use words like ‘warriors’, ‘frontline’ etc. But, one should be mindful of the challenges that the excessive use of the ‘war’ analogy is associated with. Citizens of India and the civil society have to ensure that the ruling class does not use the ‘war’ lexicon as an excuse to shun democratic accountability, erode civil liberties and pursue personality-cult politics.