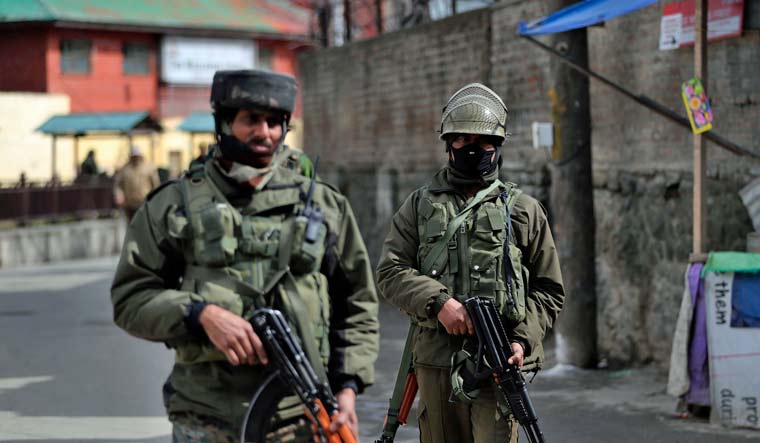 (File) Paramilitary personnel guard at a market in Srinagar | AP

In a late-night move on Friday, the Central government amended its earlier order on a new domicile law in Jammu and Kashmir that reserved only level-4 jobs for the residents of the Union territory and left the rest open for all.

After the amendment, all jobs are now reserved for the domiciles of Jammu and Kashmir, which was stripped of its special status under Article 370 of the Constitution on August 5, 2019, and downgraded to a Union territory.

Anyone who has resided in Jammu and Kashmir for 15 years or has studied in the state for seven years and appeared in the Class 10 or the Class 12 examination will be eligible for domicile certificates. This would allow them to apply for gazetted and non-gazetted government jobs.

Migrants registered by the Relief and Rehabilitation Commissioner have been exempted from fulfilling the amended requirements.

The law also includes children of those who fulfil the aforementioned criteria even if they do not live in the Union territory.

The amendment came a day after the BJP leaders in Jammu informed the party leadership in New Delhi that people in Jammu where very angry with the law and had threatened to lay siege to the BJP offices in Jammu. Altaf Bukhari, the former PDP minister who had floated the J&K Apni Party, had also met with Home Minister Amit Shah and NSA Ajit Doval.

The BJP is hoping to make big gain in Jammu in the next election that will be held after the delimitation exercise of Assembly constituencies is completed due to several steps its has taken for the benefit of the Hindu-majority region including removal of Article 370.

After delimitation, Jammu will have 43 seats in the 90-member Assembly .That is likely to address the perceived imbalance in power between the regions of Jammu and Kashmir.

The earlier order elicited strong reactions from political parties in Jammu and Kashmir. Leading the attack was National Conference leader Omar Abdullah, who said the law was an ‘insult to injury’, a reference to downgrading of the former state into a Union territory and abrogation of it special status.

“Talk about suspect timing. At a time when all our efforts & attention should be focused on the #COVID outbreak the government slips in a new domicile law for J&K. Insult is heaped on injury when we see the law offers none of the protections that had been promised,” Omar had tweeted, also questioning the order’s timing during the coronavirus outbreak.

In another tweet, Omar wrote, “You can imagine how hollow the domicile law is from the fact that even the new party (alluding to the Apni Party) created with Delhi’s blessings, whose leaders were lobbying in Delhi for this law, have been forced to criticise the #JK domicile law.”

The Peoples Democratic Party (PDP) had termed the law as “frighteningly ambivalent, irresolute and akin to rubbing salt to the peoples wounds”.

Demanding an immediate rollback of the law, Choudhary said the government of India should prioritise all its efforts in containing the spread of coronavirus in the country as well as in Jammu and Kashmir.

“We want the government to save the precious lives from the virus, which is out to swallow the entire human race. When world is battling the coronavirus pandemic, it is deeply perturbing that some in the corridors of power are playing mind games with the perturbed people of Jammu and Kashmir who have been battling odd times since decades,” he said.

The  J&K Apni Party, in a statement, had said the domicile order reflects a casual exercise carried out at bureaucratic level without taking aspirations and expectations of people into consideration.

The statement said the order be put in abeyance till the country is out of dangers arising out of coronavirus. “This order in its entirety is a casual attempt, cosmetic in nature, to hoodwink the people of Jammu and Kashmir...,” the statement said.