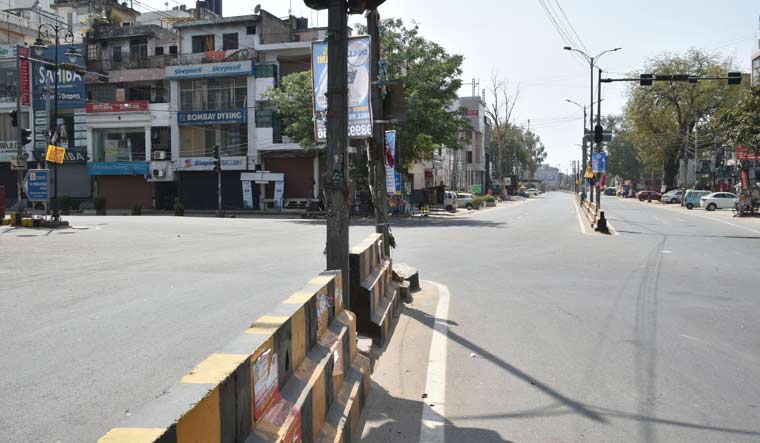 An otherwise busy intersection in Gurgaon lies deserted on Sunday, because of the 'Janta curfew' | Aayush Goel

It is official. The air is clear. We are breathing better.

Despite the air being thick with accusations on why and how the Cov-SARS 2 virus is spreading across the country, it is at least free of the heavy pollutant load that hung as a menacing cloud across cities.

Sample this alert by the ministry of earth sciences's System of Air Quality and Weather Forecasting and Research (SAFAR). The overall Delhi Air Quality Index (AQI) is in 'satisfactory' category on April 1 morning. According to SAFAR, the AQI is likely to improve to "good'' on Thursday and Friday. This forecast is looking at an estimated reduction in local emissions due to lockdown.

It is not just Delhi that is breathing fresher air. SAFAR, which records AQI in Mumbai, Pune and Ahmedabad, has pointed out a similar dip in air pollutants in these cities as well. According to SAFAR data, which documented the impact of COVID-19 control measures on air quality till March 30, there has been a remarkable dip in nitrous oxide (NOx) and particulate matter (PM) 2.5. Delhi recorded the maximum drop in NOx at 63 per cent, followed by Pune (55 per cent), Mumbai (51 per cent) and Ahmedabad (36 per cent).

ALSO READ: When nature reclaimed its rightful space, thanks to COVID-19 lockdown

Besides, the air quality data compiled by the Central Pollution Control Board (CPCB) for April 1 showed that across the 99 cities and towns, there was an improvement in air quality. According to CPCB, only Guwahati had a 'poor' air score while most others were either in 'good' or 'satisfactory' category. Thirteen cities recorded 'moderate' air quality.

Although the lockdown began on March 25, Delhi had come to a halt on March 22, the day of janta curfew. The Arvind Kejriwal government announced the city's lockdown from March 23, and by March 25, the national lockdown fell into place. The capital has other factors, too, to thank for its exceptional clear skies and crisp air. With six western disturbances bringing rain to the city, March 2020 was the wettest for the capital since records began in 1901. The month recorded 109.6 mm of rain and Delhi saw 10 'satisfactory' AQI days.

A number of factors contribute to the capital's bad air. The vehicular traffic load is a primary one) Kejriwal's road rationing schemes to reduce vehicular load have only been partially successful in the past. Delhi, along with most cities across the Gangetic belt, receives a lot of dust. The problem gets aggravated when farmers in neighbouring villages start burning stubble to clear their fields. This is particularly so in November, when temperature inversion also kicks in, trapping the pollutants closer to the surface.