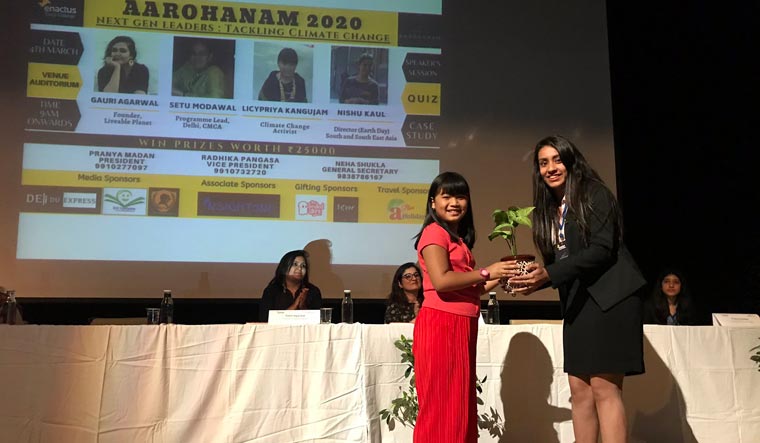 Dear @narendramodi Ji,
Please don’t celebrate me if you are not going to listen my voice.

Thank you for selecting me amongst the inspiring women of the country under your initiative #SheInspiresUs. After thinking many times, I decided to turns down this honour. 🙏🏻

As part of these celebrations, Prime Minister Modi launched a 'She Inspires Us' campaign on social media to encourage people to share stories of women who inspire.

Eight-year-old Licypriya Kangujam was one such face selected for the "She Inspires Us" campaign. On Thursday, the government's citizen-engagement platform, MyGovIndia, tweeted, "@LicypriyaK

is an child environmental activist from Manipur. In 2019, she was awarded a Dr. APJ Abdul Kalam Children Award, a World Children Peace Prize, and an India Peace Prize. Isn't she inspiring?.."

The only problem was Licypriya was not impressed. On Thursday, from her official Twitter handle, which is managed by a guardian, Licypriya tweeted, "Government don’t listen to my voice and today they selected me as one of the inspiring woman of the country. Is it fair?..."

On Friday, she addressed Modi, saying, "... Please don’t celebrate me if you are not going to listen my voice. Thank you for selecting me amongst the inspiring women of the country under your initiative #SheInspiresUs. After thinking many times, I decided to turns down this honour."

Licypriya has often been referred to as the "Greta Thunberg of India" and been compared to the Swedish teenager who campaigns on the issue of climate change. However, Licypriya has denounced the comparison, noting she was not an activist to become like Greta. Moreover, Licypriya has argued her activism started in July 2018, before Greta ventured into the field.

Licypriya has campaigned for limiting carbon emissions and other greenhouse gases. She also wants climate change to be made part of the school curriculum.

Licypriya had protested outside Parliament in June 2019 to demand action on climate change from the Modi government.

Licypriya told The Indian Express on Saturday that 'She Inspires Us' "may be a good initiative" to the government, "but considering the crimes against women and children, I don’t think it can solve anything. This will be like applying a fairness cream on our face which no longer stays once you clean yourself... Instead, I want him (Modi) to listen to my voice and our leaders to take climate change seriously”.

She declared Indian leaders have never considered climate change to be a serious issue and told The Indian Express, "I have neither been called nor invited to discuss my concerns."

In addition to addressing various events on climate change, Licypriya also travels extensively. On March 5, she tweeted that she planned to travel from India to the UK in an electric car in September to spread awareness on use of fossil fuels. The move is planned to get publicity for climate change campaigns ahead of the Conference of Parties (COP) of the UN Framework Convention on Climate Change (UNFCCC). The conference will be held in Glasgow from November 9-19.

Licypriya tweeted, "I’m traveling 🧭 from India 🇮🇳 to UK in an electric ⚡️car 🚙 to raise the awareness to stop using fossil fuels by driving 18,000 km crossing 18 countries in 90 days in September ahead of @COP26".