The story behind the library at Shaheen Bagh 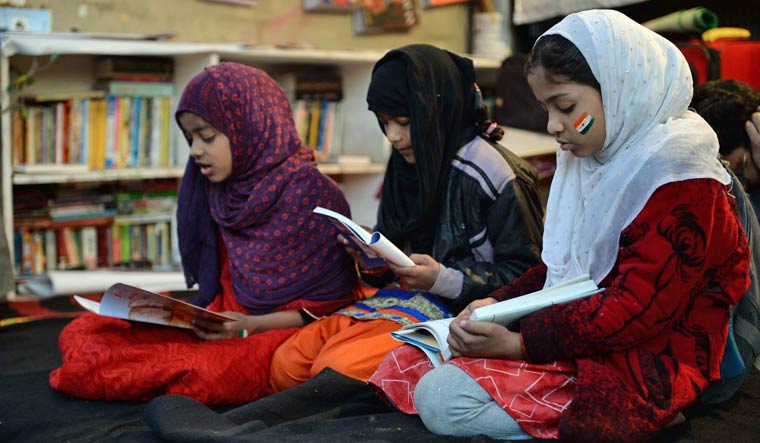 Children at the roadside library in Shaheen Bagh | Salil Bera

Mohammed Asif from Uttar Pradesh could not sit still ever since he started tracking the Shaheen Bagh protests in Delhi. A post-grad from Aligarh Muslim University and a student of Persian from IGNOU, he felt he could not afford to stay aloof in these politically-fraught times with all his education.

Although from Muzaffarnagar, he has moved to Delhi's Batla House this month and started a library at the Shaheen Bagh protest site. He has aptly named it 'The Fatima Sheikh-Savitribai Phule Library' after two women educators and social reformers who broke through the confines of domesticity in their time to champion the cause of women's rights and their access to education. Something easily resonant for the brave women of Shaheen Bagh.

"It is for the first time in my life that I have seen so many women, otherwise cooped up in their houses, come out to the streets, forget their codes of purdah and fight for what is right," says Asif who started this library on the 17 January, the 4th death anniversary or "martyrdom" of PhD scholar Rohith Vemula.

"Today the reach of education is getting more and more limited in this country. But education should be like an open library. Everyone is welcome to receive knowledge without having to pay hefty fees," says Asif about the rationale of setting up the Fatima Sheikh-Savitribai Phule Library. "Why do you think libraries are being attacked in our universities? Because it is a symbol of protest. It teaches you to ask more questions and demand better answers."

From what started as a collection of 40 books from the personal reserves of Asif and his friends, the library now stocks over 1000 titles across categories in the social sciences collected from donors and visiting protesters. There are Hindi littérateurs like Mannu Bhandari and Hari Shankar Parsai. There's Rabindranath Tagore's Gora, Gandhi's Hind Swaraj, Nehru's Discovery of India, Bhagat Singh's jail diary, and Abdul Kalam Azad's India Wins Freedom. There are books by Ambedkar, Khushwant Singh, Arundhati Roy and Gauri Lankesh, alongside Rana Ayyub's Gujarat Files in Urdu and Vinayak Damodar Savarkar's treatise on Hindutva.

"We keep chanting Bhagat Singh, Gandhi, Nehru and Ambedkar-wali Azaadi. But what were their ideas? This fight is ideological. We have to strengthen our ideas and arguments. We need to read more books. And for books, you need a library."

But Asif has a bit of a problem on his hands. The library that is intended for women readers hardly attracts its target audience. "For the last two days, we haven't seen many women participating. We also held a meeting to discuss the issue," Asif tells THE WEEK on February 15 at the library, mostly peopled with young men and one or two college-going women, poring over books on nationalism and the constitution. Undeterred, Asif is up to the challenge of getting more and more of the women of Shaheen Bagh to read, even though he is fully aware of the limitations which prohibit reading time for mothers, housewives and "dadis" who come to the protest site every day.

The reference library has started lending books only to women, so they have the time and space to read at home. Most of the books now exist here in Hindi, English and Urdu

Asif recalls Shaheen, a mother of two school-going children. She came by a few days ago and chose to borrow a book written by Ravish Kumar. "She told me how she gave up on studying and reading after her marriage," says Asif. "The next day she came back and took a Karl Marx book. Later, she told me how she never plans to give up reading again."

Asif estimates that so far they have issued some 30 books, which includes titles on Bhagat Singh and Mein Kampf, works by Ismat Chugtai and Kahlil Gibran. "If you think about it, we are saving the constitution here as well," Asif says, half-jokingly. "It is the most sought-after book here."