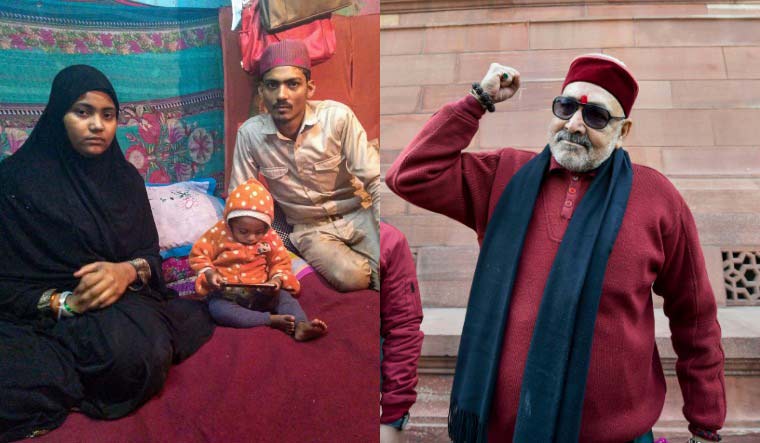 A collage showing the family of Mohammad Jahan, the child who died from exposure to cold at Shaheen Bagh, and Union Minister Giriraj Singh | PTI

The ongoing protests against the Citizenship (Amendment) Act at Shaheen Bagh have been a key theme of the BJP's poll campaign in Delhi. So much so, Delhi Chief Minister Arvind Kejriwal claimed on Wednesday "Shaheen Bagh is the only narrative" for the BJP in the polls.

For weeks, BJP leaders have linked the protests at Shaheen Bagh to Islamic extremism. BJP MP Parvesh Sahib Singh Verma had warned that the Shaheen Bagh protesters would step into homes of Delhi residents and rape daughters and sisters, while poll candidate Tajinder Pal Singh Bagga had warned of a surgical strike on Shaheen Bagh.

While campaigning for the Delhi polls is now over, the rhetoric over Shaheen Bagh is continuing.

Giriraj Singh, Union Minister for Animal Husbandry, on Thursday morning tweeted, "Shaheen Bagh is no longer just a movement. It is a breeding ground for suicide bombers. It is a conspiracy against the country in the capital.”

Considered to be a hardliner, Giriraj Singh also tweeted a video of children abusing and threatening Prime Minster Narendra Modi. Giriraj Singh tweeted, "Listen to these children. The poison that is being filled in their minds. What else is there, if not the Khilafat movement."

The Khilafat movement, which was started in 1919, was an agitation by Indian Muslims to demand the restoration of the Ottoman caliphate, which was effectively destroyed after the end of the First World War. The Khilafat Movement is considered the first pan-India Muslim political movement.

Later speaking to news agency ANI, Giriraj Singh referred to the death of a young child at Shaheen Bagh. Referring to a purported claim by the mother of the child that he was a "martyr", Giriraj Singh asked if this "was not a suicide bomb, what else is it?". "If you want to save India, this suicide bomb and Khilafat movement have to be dealt with,” Giriraj Singh declared.

Four-month-old Mohammad Jahan, who had been taken to the protest at Shaheen Bagh, had died on January 30 from exposure to the cold. Despite the child's death, his mother, Nazia, told NDTV she would continue to come to Shaheen Bagh. "We are ready to sacrifice the lives of our other two children if need be. We are determined to continue our protest," she told NDTV.

On Wednesday, BJP MP Tejaswi Surya referred to the protests at Shaheen Bagh in a speech in the Lok Sabha and warned it could mean the return of "Mughal Raj". Surya said, "What is happening today in Delhi's Shaheen Bagh is a stark reminder that if the majority of this country is not vigilant, the patriotic Indians do not stand up to this, the days of Mughal Raj coming back to Delhi are not far away.”