Dishes such as appam and egg curry, porotta, dosa, puttu, kadala do not find a place 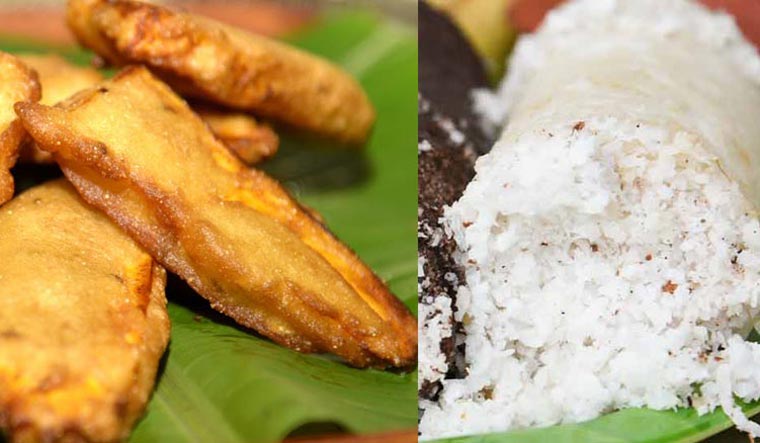 A collage of pazhampori (left) and puttu | Via onmanorama

The price of the food at the Railways Vegetarian Refreshment Room (VRR) and restaurants has been doubled. Apart from this, most of the delicacies from Kerala have been left out from the revised menu.

Dishes such as appam and egg curry, porotta, dosa, puttu and kadala curry do not find a place on the new menu. These items were the most sought-after at railway stations in Kerala.

While uzhunnu vada and parippu vada were retained, snacks such as pazhampori, bhaji, illayada, kozhukatta, unniappam, neyyappam and sukhiyan were taken off. Instead samosa, kachori, aloo bonda and stuffed pakoda would be sold at the stalls.

In the snack meal category, masala dosa, curd rice and sambhar rice from south India have been included. The other foods on this category are rajma chawal, chhole bhature, pav bhaji, khichdi, pongal and kulcha. Even drinks such as lemon juice have been removed from the stalls.

Along with the rate on trains, the food price at stalls has also seen a significant rise. The price for rice meals has been jacked up from Rs 35 to Rs 70. Uzhunnu vada and parripu vada, that were available for Rs 8.50, now costs Rs 15. Two vada would cost Rs 30. But two pieces each of aloo bonda, kachori, and samosa would cost you only Rs 20.

There are complaints that north Indian food items are being imposed.

The Indian Railway Catering and Tourism Corporation (IRTC) had revised the menu and increased the prices. The IRTC has a regional manager in Chennai, and regional manager in Ernakulam. Allegations were raised that they did not point out the flaws in the menu.

A janata meal, comprising seven pooris and potato curry, is listed for Rs 20 on the menu. However, it is not available at any of the restaurants. The contractors have claimed that there are no takers for this in Kerala. This food package would appeal to the migrant workers.

For breakfast, two uzhunnu vadas, of 30gm, have to be purchased mandatorily along with two ildi. If you need a third idli, you need to give Rs 30 to buy the same combo again. This has led to squabbles at several stations.