Why Christian priest, lecturer from Meghalaya filed PIL against CAA 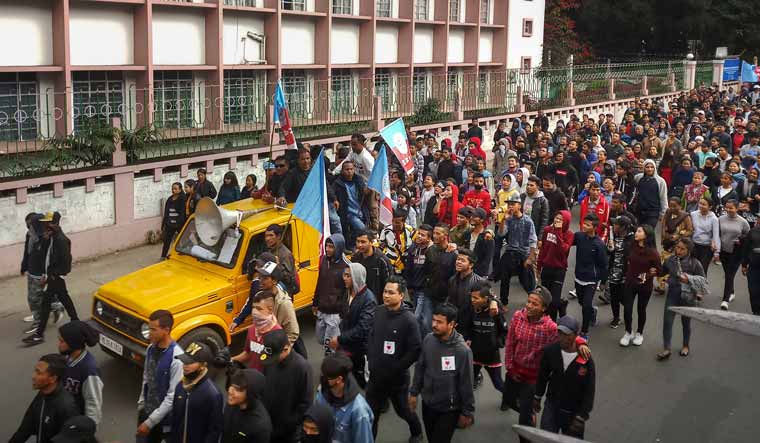 (File) Protesters take part in a march against the passing of Citizenship Amendment Act, in front of Raj Bhavan in Shillong | PTI

The petitioners, in their joint statement, clarified that they are challenging the Citizenship Act because “it attacks the fundamental rights of the individuals belonging to the tribal communities, with respect to their persecution as a transborder tribal community as well as their status in neighbouring countries”.

Transborder tribes include Khasis, Garos, Pnars and Hajongs, who have, for years, lived in Bangladesh. There has been a long history of migration of these transborder tribes from the neighbouring country to the state of Meghalaya. Critics of the Citizenship (Amendment) Act in Meghalaya claim the legislation provides “zero protection” to these tribal communities who have migrated after having faced persecution on account of their ethnic identity.

Pyrtuh and Passah also stated that the Citizenship (Amendment) Act failed to take into account “the lived realities of the inhabitants of those border regions, many of whom follow indigenous religions and do not identify as being part of any of the six selected religious communities”. They allege the Citizenship Act is a “blatant design” for creating a divide among various tribal communities. Many of the tribal communities do not fall under any of the major religions as they follow traditional belief systems, and therefore would not receive any protection under the Citizenship (Amendment) Act.

Pyrtuh is a founder-member of the progressive people’s group Thma U Rangli Juki (People’s Upsurge) and has been at the forefront of a number of protests and movements in the state and nationally. Kyrsoibor Pyrtuh is a pastor of the Khasi Jaintia Presbyterian Church, the largest Christian denomination in the Khasi Jaintia Hills.

Mantre Passah, a college lecturer based in Shillong, is an executive member of the Workers’ Power of Meghalaya, a federation of trade unions and associations in the state, and a member of Thma U Rangli Juki. He has been active in organising workers and has been part of public campaigns for the past four years.

Passah argued he was opposed to the Citizenship (Amendment) Act as it provides a discriminatory legal immigration regime, which fails to take into account communities, tribal or otherwise, who have been persecuted in the neighbouring countries. “A just and fair immigration regime should be in place, which does not discriminate but also understands historical contexts in terms of the numerous transborder communities, which we find here in the northeast,” he argued.

Pyrtuh says, “We want a fair, just and equitable immigration regime. The problem of refugees must be addressed in consonance with international laws. India does not have a proper refugee or immigration regulation.” He added that any move for a proper immigration regime must be undertaken after wide consultations, especially with the states of the northeast.

Pyrtuh further explains why the perspective of the northeast on the unconstitutionality of the Citizenship (Amendment) Act is different from that of the rest of India. “Northeast is a region with innumerable tribes, each having distinct religious, cultural, social and political identities. These various tribes are very small in number and occupy limited spaces as compared with the people of the plains. Laws like the CAA will certainly have an adverse impact on them, be it religion, social, political and economic,” he explained.

Pyrtuh adds, “For us, tribal ethnicity is the core. Our struggle is how to maintain and protect our identity as a tribe from being swallowed up by the majority.”

When asked whether his role as a Christian priest would make him vulnerable to criticism, Pyrtuh says, “I am already a victim, but I shall not bend my knees before the insolent might.”

“Of course, politics of appeasement has always been there here in the northeast, but we have to remember that the present NDA government has managed to get most of the regional parties and groups to their fold,” Pyrtuh says. “They are masquerading as saviours, while their actions state otherwise.”

Passah also mentions that the issue of persecuted tribal communities also affects states other than Meghalaya. “We urge progressive groups from other northeastern states to also bring this issue to the fore,” he declared.

Pyrtuh remarks, “If only 10 tribal people are impacted by this law, these 10 people have to be protected.”

The PIL by Pyrtuh and Passah is being represented by a group of lawyers including Gautam Bhatia, Vrind Bhandari and Malvika Prasad. Passah reveals, “We plan to approach the PIL based on documentary proof, academic literature as well as statistical data to emphasise our grounds.” He admits that they have full faith in the “energetic group of lawyers who are helping provide a robust sequence of arguments to push this case”.

In their statement, the petitioners said, “We feel the act is clearly motivated by insidious thinking and planning of the present ruling regime, the Hindutva ideology... which is based on the belief of Hindu majoritarianism and supremacy in the nation state of India, and which treats minorities, religious or otherwise, as secondary.”

Pyrtuh and Passah have alleged that the Citizenship (Amendment) Act violates the right to privacy of refugees belonging to indigenous tribes following traditional religions and imposes unconstitutional conditions upon them. In their petition, they also urged the government to respect the concerns of indigenous citizens, who inhabit border states, “with respect to the preservation of their language, land, and culture”.

They also mention that the passage of the Citizenship (Amendment) Act has generated an atmosphere of fear among religious minorities all over the country, “particularly Muslims and including those who do not profess any religious beliefs”.

In their litigation, the petitioners have requested the Supreme Court to exercise its powers under Article 142 of the Constitution in order to issue guidelines for a “just, fair and equitable immigration regime”, until such time that Parliament sees fit to enact a constitutionally valid law.