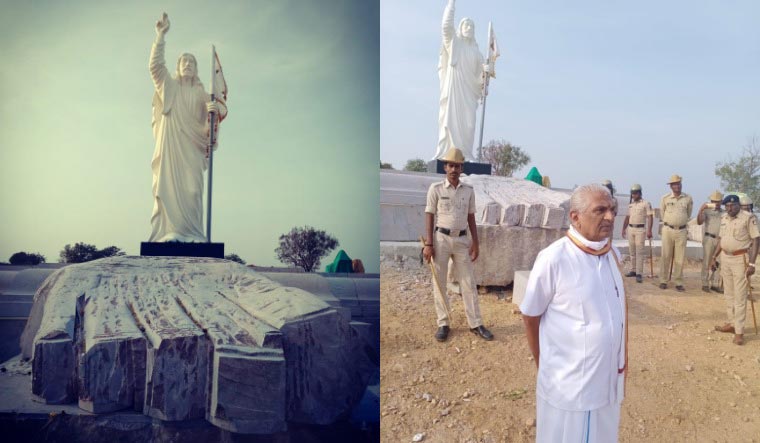 Kapalabetta—a serene hill overlooking the Harobele dam nestled amid a chain of hillocks in Kanakapura, where Arkavathy river quietly flows—has suddenly turned into a political battleground. A proposed 114-feet-tall statue of Jesus Christ atop the hill is the trigger for the saffron brigade to erupt in protest against the “conspiracy” of the Christian missionaries to convert the local residents.

Caught in this political storm is six-time MLA from Kanakapura and Congress strongman D.K. Shivakumar, who laid a foundation stone for the world’s tallest statue of Jesus Christ on December 25, 2019.

On January 13, 2020, Sangh Parivar groups led by the Hindu Jagran Vedike (HJV), set out on “Kanakapura Chalo” protest rally, demanding the BJP government stall the project. The Hindu Jagran Vedike not only issued a January 25 deadline to call off the statue project, but has also demanded for an anti-conversion law to be enacted in the country.

The proposed 114-feet-tall Christ statue is a “gimmick” to appease Christians and to please the Congress high command (referring to party chief Sonia Gandhi), alleges the ruling BJP. On the other hand, Shivakumar's supporters allege that the BJP, which is desperately trying to make inroads into the Old Mysore region, the Vokkaliga heartland, is playing the Hindutva card to dislodge Shivakumar. Shivakumar has been the MLA from the area for the last 30 years.

The presence of firebrand Hindutva icon and and RSS leader Kalladka Prabhakar Bhat in the rally has rankled Shivakumar and his younger brother and Bengaluru Rural MP D.K. Suresh.

A wary Shivakumar maintains that he only purchased 10 acres of land from the government during the previous JD(S)-Congress coalition regime by paying Rs 10 lakh. "I have purchased the land and given it to Harobele Kapalabetta Development Trust to build the statue. In the past too, I have donated money for the renovation of many temples in my constituency. The Christian community here approached me and I had to do it," says Shivakumar, who is hoping that the controversy dies down soon.

The statue row has cropped up at a time, when Shivakumar is preparing for a greater role in the Congress and fighting adversaries within his party too.

Addressing the rally on Monday, Bhat expressed concern over the Christian missionaries trying to convert “innocent Hindus”. “Stop playing vote bank politics. You are eyeing the votes and perhaps notes too. If you want to erect statues, you might as well build the statue of Balagangadhara Swamiji or Pejawara Swamiji. But you chose to build a statue for Sonia Gandhi and that worries us. We will not allow Christ statue to come up at Kapalabetta and we are ready for any sacrifice. But before that, your political career will be sacrificed,” Bhat warned the 'DK' brothers.

Taking on Shivakumar and Suresh, Bhat charged that the brothers were supporting the deceit of the missionaries. "Hindus are naive... We accept every god. We have no issue about Jesus and Allah being god. But why are you converting Hindus? Jesus is not a Christian. But some people are appropriating his name and indulging in conversions through inducement and our people are falling for it. Your [Shivakumar's] parents have named you after Hindu gods with great hope. Your children will not remain Hindu unless you protect the Hindu society. You are doing it for the vote bank, to secure your seat and perhaps for the notes,” he alleged.

“One brother is an MLA, the other is the MP. What the government has seized [black money] from you is very little. But don’t you have enough to feed your future generations? Let them build Christ statue in England or America. Do you want to sell the country again? We will not allow it and are ready for sacrifice... But before that, we will ensure your political career is finished too,” warned Bhat.

“In Nagaland, Indians needs a special permit to enter the state and the welcome board says 'You are entering the land of Christ!' Is this not the land of Krishna?” asked Bhat.

Citing the example of a school run by him in Dakshina Kannada, Bhat says, “I have children from northeast studying at my school in Kalladka and we do not try to convert them. But the missionaries claiming to serve the poor ensure that children in their orphanages grow up wearing a cross around their neck,” Bhat alleged.

“I am appalled that D.K. Suresh is accusing us of disturbing peace and harmony in the region. It is only now the Hindus have woken up from the Kumbhakarna slumber and are united and energised like Lord Hanumantha to fight this conversion conspiracy,” he added.

The HJV leaders urged the people to keep a vigil in their own villages to ensure that no one erects a cross atop any hill, alleging it would eventually lead to usurping of the government land surrounding it. The government should withdraw the land sanctioned for the statue project and ensure that the granite slabs collected atop the Muneshwara hill are shifted out, the group said.

Is BJP barking up the wrong tree?

Kapalabetta, the epicentre of the controversy, is now facing an identity crisis as the BJP prefers to call it “Muneshwara Betta” or Kapali Betta”. But the locals insist it is Kapalabetta or “Yesu betta”.

The proposed site for the gigantic statue overlooks the Harobele dam. A 1km trek up the steep slope takes you to the site where a model of the proposed statue has been erected. A little farther, a platform has been built to install the giant statue.

“The 14 stations of Jesus’s death are depicted in small shrines along the hill. The 15th station is unique and is the final stage, where the 114-feet tall statue is planned. Here, Jesus is seen flaunting a 'victory' sign to signal his resurrection in three days after his death. This gesture of Jesus is rare. We hope to mobilise Rs 25 crore to complete the statue,” says Inasappa, president of Kapalabetta Development Trust.

The cross erected on the hilltop is at least 400 years old, claim locals. A majority of residents in Harobele village are Christians and they allege the BJP government is trying to target Shivakumar by creating a controversy.

“First of all, this hill is not called Muneshwara Betta. It is Kapalabetta in Nallalli panchayat and not Kapali Betta, as BJP wants you to believe. There was no temple of Muneshwara swami here. The Muneshwara betta is in Maralebekupe panchayat. The cross atop Kapalabetta has been there since 1906 and villagers, both Hindu and Christians, have faith that Christ cures illnesses and solves all their problems,” claims Chinnappa, who says his family has been Christian for at least five generations.

Bhadregowda, a Vokkaliga devotee of the shrine, says he wears the cross and Lord Shiva’s beads around his neck and has donated Rs 1 lakh for the development of Kapalabetta as a shrine.

Ramesh, a Hindu auto driver, says that no Hindu in the vicinity has any objection to the statue coming up in the hill.

Interestingly, the Harobele village has nearly 200 Christian families and only a handful of Hindu families. But the nearby villages has negligible population of Christians.

“The Christian families have been here since 450 years. There has been no forced conversion in Ramanagara district. How come the rest of the nearby villages do not have Christian families? It is only political opportunism of the BJP at play,” says a supporter of Shivakumar.

Defending the BJP stand, Prabhakar Bhat contends that the 200-odd families in Harobele have been given land as inducement to convert to Christianity.

“Imagine a girl is named Victoria Rani, who is the daughter of Puttanna Raja. Harobele dam is being called Padri lake and a nearby hill is now called Nirmala betta. This is just the beginning. We have seen the same modus operandi of missionaries elsewhere in the country. Our governments and people have given lands to build churches and mosques. But don’t mistake our generosity for our weakness. DK Shivakumar should remember what happened to YSR Reddy, a convert, who allowed non-Hindus into Tirupati. We are not opposed to individuals but are against bad politics,” argues Bhat.