Soumya Sarin is a neonatologist, paediatrician; her husband works with the Congress 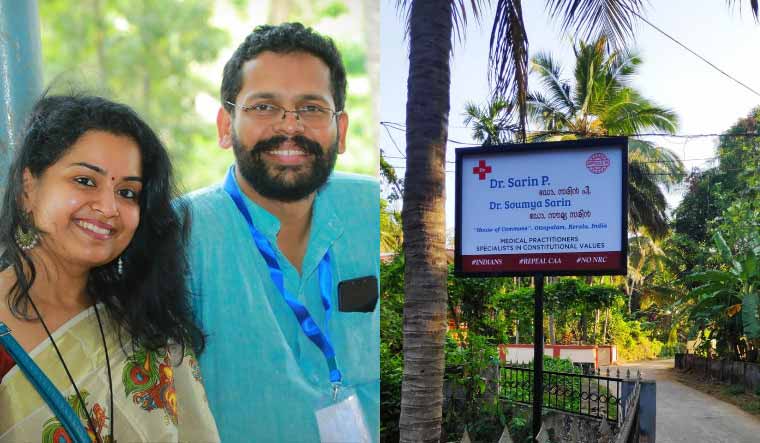 A collage of Dr Soumya Sarin and Dr Sarin P. and the signboard outside their house | Via Facebook

Kerala and Keralites have always had a way with innovative forms of making a statement on contentious issues. When protests against the Citizenship (Amendment) Act erupted in December, a couple who were engaged did a 'save the date' photo-shoot with the theme of rejecting the CAA and NRC.

Now a married couple from Kerala, this time two doctors, are making news for their own unique protest against the Citizenship Act. Dr Sarin P. and his wife, Dr Soumya Sarin, recently erected signboards outside their house in Ottapalam, Palakkad district, to reflect their stance on the Citizenship Act.

Both boards contain their names and a reference to 'Article 15'. Article 15 of the Constitution guarantees equality before law to all and prohibits discrimination against India citizens on the basis of religion, race, caste, sex or place of birth. One board describes their house name as 'House of Commons' and refers to them as 'Medical Practitioners, Specialists in Constitutional Values'. The other board informs 'Examination and medical advice will be conditional on loyalty to the Constitution', complete with hashtags against the Citizenship Act and NRC.

Not surprisingly, some social media handles interpreted the second board as meaning that people who are in favour of the Citizenship Act and NRC would be denied treatment.

Responding to the criticism, Soumya Sarin, posted a message in Facebook on Wednesday, stressing their commitment to medical ethics, arguing that medical ethics could never be against the Constitution. She rubbished the allegation that only those who are opposed to the Citizenship Act and NRC would be treated by them. She also rejected allegations that they were making a political statement.

Soumya Sarin is a neonatologist and paediatrician, who works with hospitals in Palakkad. She received the president's gold medal in paediatrics in 2018. Dr Soumya Sarin also runs a popular Facebook handle, in which she does live sessions to discuss medical problems and dispense advice. The page has over 3.6 lakh followers.

Her husband, Dr Sarin. P, is a trained doctor who was selected to the Indian Audit and Accounts Service (IAAS), which falls under the Comptroller and Auditor General of India.

Sarin left the civil services in 2016 to take up politics. In 2018, he was appointed by then Congress chief Rahul Gandhi to head the party's research department in Kerala.