JNU VC Jagadesh Kumar and his many controversies: Now, student union wants him out

As a vice chancellor, Kumar has weathered a stormy tenure in JNU 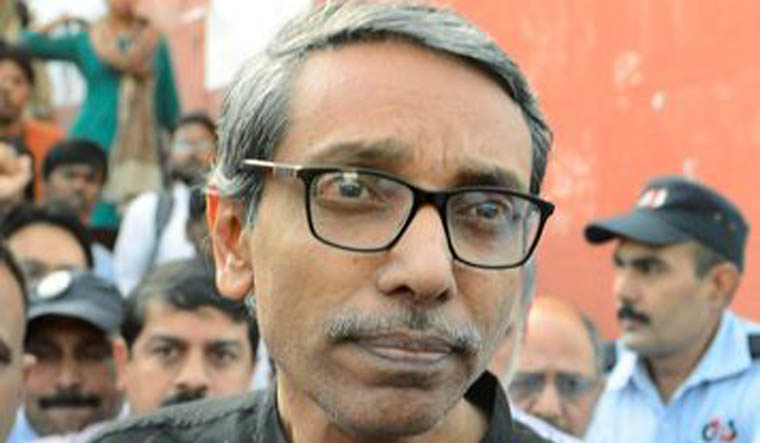 On Monday, after a masked mob unleashed violence in JNU, the Jawaharlal Nehru University Students' Union accused the vice chancellor of "perpetrating violence" in the university. Accusing Mamidala Jagadesh Kumar of behaving like a "mobster", the JNUSU said he used all means to ensure that students and teachers faced "violence". It also alleged that outsiders were brought in with lathis and rods to "perpetrate violence". "This vice chancellor is a cowardly vice-chancellor who introduces illegal policies through the backdoor, runs away from questions of students or teachers and then manufactures a situation to demonise JNU," the JNUSU charged. It demanded that the vice chancellor tender his resignation or be removed by the HRD ministry.

As a vice chancellor, Kumar has weathered a stormy tenure in JNU. A professor of electrical engineering at IIT Delhi, the academic with a primarily science background was given the charge of administering JNU, which has a strong humanities culture. The president had selected Kumar from a panel of four eminent names, including scientist V.S. Chauhan, coordinator of the National Centre of Applied Human Genetics at JNU, R.N.K. Bamezai and Ramakrishna Ramaswamy of the Department of Physical Sciences, JNU.

He is a karate enthusiast, who, by his own admission, regularly practises Shito-Ryu karate. Born in Mamidala, Nalgonda district of Telangana ,he obtained his MS(EE) and PhD(EE) degrees from IIT Madras, and did post-doctoral research at University of Waterloo in Canada. He was also the organising chairman of Graduate Aptitude Test in Engineering (GATE), 2012; According to him, he has more than 200 publications in his field of nanoelectronic devices, nanoscale device modeling and simulation, innovative device design and power semiconductor devices.

His detractors say the vice chancellor, who took charge in January 2016, is implementing the agenda of the RSS and has been brought in by the Union government specifically for this purpose. However, he has repeatedly disavowed associations with any organisation. In November 2017, he invited spiritual guru Sri Sri Ravi Shankar to deliver the prestigious Nehru Memorial Lecture. In July 2018, during a ceremony to commemorate the Kargil victory, the vice chancellor spoke about installing a battle tank on campus to instil patriotic values in students.

From the infamous sedition row of 2016 and lockdown of his office multiple times to the Union HRD Minister getting stuck for over six hours at the venue of JNU's convocation, Kumar's tenure as the vice chancellor of the university has been marred with controversies. Kumar had first brush with controversies as the VC just a week after his appointment, when students locked horns with the administration over holding an event against the hanging of parliament attack convict Afzal Guru.

While permission was denied, the students held a debate on February 9, 2016 during which anti-national slogans were allegedly raised, leading to students being slapped with sedition charge. Then JNU students union president Kanhaiya Kumar was arrested and the controversy led to a massive protest by the students. The students continued to be at loggerheads with the VC over penalties imposed by the varsity on students whose role was established in the February 9 event by an inquiry committee.

Nine months later, a student—Najeeb Ahmad—went missing from the university campus after a brawl with members of RSS-affiliated ABVP. Najeeb has not been traced in three years and there have been umpteen protests on and off campus on the issue. There have been several instances of the VC's residence and office being gheraoed by the students.

In 2017, Kumar passed an order prohibiting demonstration and protest in the vicinity of the "administration block", which houses the offices of top varsity officials. The move triggered more protests by the students. In March 2019, the VC alleged that his wife was confined inside his house by hundreds of students who broke into his residence.

On Monday, Union HRD Minister Ramesh Pokhriyal 'Nishank' was stuck inside the AICTE headquarters, the venue for JNU convocation, for over six hours as protest by the JNU students against a steep hostel fee hike escalated. The police had to use water canons to disperse the protestors, while the minister had to cancel his two scheduled events. The students' union has been on a strike for 12 days against the draft hostel manual, which was approved by the inter-hall administration. They have said the strike would not end until the hostel manual is withdrawn.

Violence broke out at Jawaharlal Nehru University on Sunday night as masked men armed with sticks and rods attacked students and teachers, damaging property on the campus. The administration called in the police, who then conducted a flag march. At least 28 people, including JNU Students' Union president Aishe Ghosh, were injured as chaos reigned on the campus for nearly two hours. The Left-controlled JNUSU and the RSS-affiliated ABVP blamed each other for the violence.

Kumar had responded, according to ANI: "We Would like to appeal to all students to maintain peace. University stands by all the students to facilitate their pursuit of academic activities. We will ensure that their winter semester registration will take place without any hindrance. The origin of present situation in JNU lies in some agitating students turning violent and obstructing academic activities of a large number of non-protesting students. They damaged university communication servers to disrupt the winter semester registration."