Did Jacob Lindenthal violate his visa conditions—and was he asked to leave? 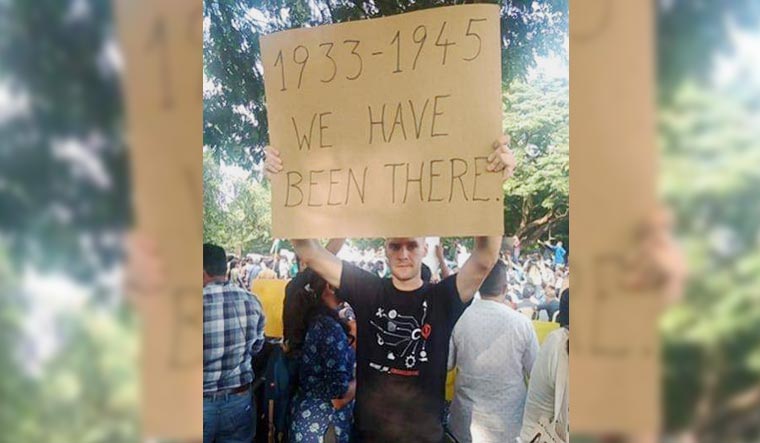 The German exchange student from IIT-Madras who was allegedly asked to leave India after he was seen at an anti-Citizenship (Amendment) Act (CAA) protest has posted on Facebook saying that he has arrived home safely and that he stands in solidarity with protesters.

In the post, which is no longer publicly available, Lindenthal praises those who protested against the CAA in India and around the world, and expressed his hope that the protests would unite those who want a change for the better.

“This morning I landed in Amsterdam safely and will return to my family soon. Thank you all for the huge solidarity that you showed! Thank you for your messages, the legal advice and the shelter I was given when my flight out of India was delayed by one day. I will take some days to arrive at home and find out where the road leads,” Lindenthal said on Facebook.

Lindenthal, a Masters student at IIT Madras's Department of Physics, left India on December 23, after images were circulated of him at an anti-CAA protest carrying signs saying “1933-1945: We have been there”, “No democracy without dissent” and “Uniformed criminals = criminals” circulated. Lindenthal allegedly violated the terms of his student visa by participating in a protest.

According to the Ministry of Home Affairs, “Foreign nationals shall be required to strictly adhere to the purpose of visit declared while submitting the visa application. However, a foreign national (other than a Pakistani national) coming to India on any type of visa will be allowed to avail activities permitted under Tourist Visa.”

Activities permitted under a tourist visa, according to the MHA, are “recreation, sightseeing, casual visit to meet friends or relatives, attending a short term yoga programme, short duration medical treatment including treatment under Indian systems of medicine etc” with “no other purpose/ activity” allowed.

The Bureau of Immigration says in its website that the concerned Foreigners Regional Registration Officer (FRRO) or Foreigners Registration Officer (FRO) may cancel “any type of visa” if the holder is found in violation of visa conditions. In addition, regarding student visas, “In case a foreigner on Student Visa discontinues his/ her course of study abruptly and voluntarily seek Exit‘ from India, FRRO/ FRO concerned is empowered to cancel his/ her Student Visa without prejudice. “

Whether Lindenthal violated his visa remains under contention with no official statement on his exit. Unnamed government sources speaking to The Print on Thursday said that he left on his own volition in order to be home for Christmas.

The source added that a complaint had been filed against Lindenthal with the FRRO, mentioning that he was seen at an “organised protests” and that this was a visa violation. Lindenthal was allegedly orally informed about possible action against him, with no coercive action or directive to leave.

Earlier, Lindenthal told the Indian Express that he was “orally” informed that he may have to leave the country.

“These events are not so much about me but show that political freedom and the rule of law need the support of millions of open eyes and loud voices. My deep respect goes to all of you who carry the protests against CAA and NRC across India and across the world! I also want to bow down in front of those who can not show their concern about ongoing political developments openly because their existences would be threatened but who still find their ways to support those who are showing their faces,” Lindenthal wrote

“Even though the protests happen for very concerning reasons I hope that they will bring together people who want a change for the better, for true representation, freedom of expression and civil rights. I will find a way to be with you. Be in touch and take care.”

Many expressed concern of his exit, including Thiruvananthapuram MP Shashi Tharoor, who said the news was dismaying and urged IIT Madras to “withdraw the expulsion & allow India to hold its head high in the academic world.”

This is dismaying. We used to be a proud democracy, an example to the world: https://t.co/M1MU3CyJVT No democracy punishes freedom of expression. I call on @DrRPNishank to instruct @iitmadras to withdraw the expulsion & allow India to hold its head high in the academic world.

An Indian student who studied in Germany tweeted that students there were taught about their civic responsibility and about the crimes of their country.

I was a student in Germany. German students are taught about the crimes committed by their country, about equality and freedom, civic responsibility and more about the caste system than Indians are. Proud of Jakob Lindenthal. This is what I want for my country. Indian children 1/ https://t.co/yno6c63KhS

On Christmas Eve, Lindenthal told DW that he would explore his options to return to India, barring which, he would most likely return to TU Dresden and catch up with the winter semester courses. He added that he hoped to use the experience as a lesson and implement his understanding of it in his political activities for the Green Party of Germany.