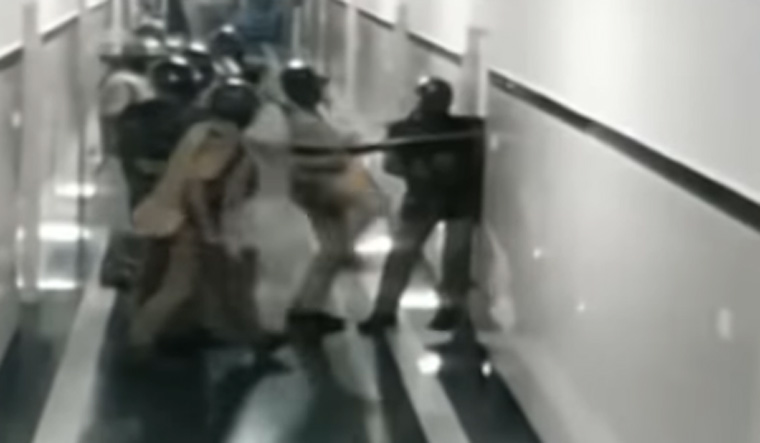 Uproar erupted on Friday morning after videos emerged that purportedly showed police personnel, some in riot gear, entering a hospital in Mangaluru and trying to force ward doors open the previous night.

The videos are from CCTV cameras at the Highland Hospital in Mangaluru; the bodies of the two firing victims were brought to this institution, which is privately owned.

The News Minute reported that the two firing victims—Jaleel Kudroli (49) and Nausheen Bengre (23)—were brought to Highland Hospital. The hospital informed police that the bodies could not be kept there as it did not have a morgue and the case was a medico-legal case. On hearing of the death of the two people, people started gathering outside Highland Hospital and a confrontation ensued between protesters and personnel.

The video clips show policemen running through a corridor and attempting to kick open a door and using lathis and shields to push people at the other side away. Local reports claim hospital staff were beaten by the police.

The News Minute reported teargas was used at the hospital's parking lot and lobby. The online portal reported the police even banged on the doors of the ICU, damaging them.

Daiji World, a publication that operates from Mangaluru, reported that even people bringing the injured were targeted by the police. Daiji World quoted a doctor as saying, "Police had resorted to lathi charge on patients' relatives inside the hospital, spreading fear among the patients, doctors and staff.”

The bodies were finally shifted to state-run Wenlock hospital after negotiations involving the victims' families and community leaders.

Daiji World reported the police were inside Highland Hospital for nearly 45 minutes and left after doctors assured only patients and their relatives were present there.