The disgruntled leaders include Munde, Khadse, Tawde and a few former legislators 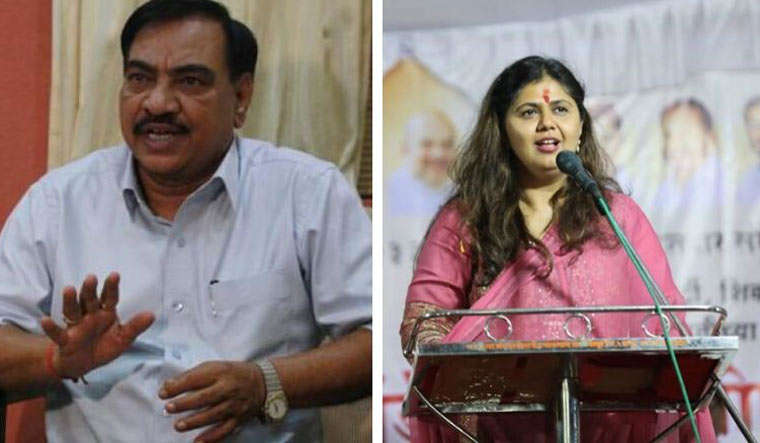 After its failure to form government in Maharashtra, the state BJP appears to be staring at the possibility of its OBC leaders raising a banner of revolt against the leadership of Devendra Fadnavis.

Munde lost the election from her bastion Parli Vaijnath, a constituency which her father and late BJP stalwart Gopinath Munde had painstakingly nurtured. She was defeated by her cousin Dhananjay who had joined the NCP after parting ways with the BJP.

Munde, in a recent Facebook post, had urged her supporters to come together at Bhagwan Gad in Beed district on December 12—on the birthday of late Gopinath Munde. In her post, she had also written that she was introspecting on the reasons of her defeat.

There is a feeling in Munde's camp that her election was sabotaged by Maharashtra BJP's powers that be.

In case of Khadse, he was denied ticket by the party. Instead, the ticket went to his daughter Rohini who went on to lose against Shiv Sena rebel Chandrakant Jadhav. Khadse too feels that his daughter faced a defeat because of BJP's internal politics.

Khadse recently said he had written a letter to party's central leadership, highlighting the names of those responsible for his daughter's defeat.

Both Munde and Khadse are powerful OBC leaders and have a sizable following. At a time when the BJP was regarded as Brahmin-Baniya party, Maharashtra BJP's then general secretary (organisation) late Vasantrao Bhagwat had taken a conscious decision to nurture OBCs in Maharashtra as party's support base. The strategy began with focusing on Mali, Dhangar and Vanjari communities and became known as MaDhaV formula . As Maratha community was strongly connected with the Congress and was enjoying the fruits of power, the BJP focused on the OBCs who constitute around 40 per cent votes in Maharashtra and felt that they had been neglected in power politics.

Bhagwat's strategy paid rich dividends and the BJP soon began boasting of a formidable following among OBCs. A number of star BJP leaders in the 1990s were OBCs, with Gopinath Munde and Eknath Khadse leading the pack. Gopinath Munde was deputy chief minister in the first Sena-BJP government while Khadse held finance portfolio.

Khadse, a Leva Patil by caste, has a strong following in north Maharashtra. Pankaja Munde is a Vanjari and has a strong base in Marathwada region. In fact, till 2014, Khadse was the face of state BJP as he was the leader of opposition in Maharashtra. After Gopinath Munde became central minister in the first Narendra Modi cabinet, most BJP leaders thought that it would be Khadse who would become the chief minister if BJP came to power. The crucial decision of breaking the alliance with Sena in 2014 was announced by Khadse himself while Fadnavis, the then state president, preferred to remain behind the scenes.

Prime Minister Narendra Modi's decision to make Fadnavis the chief minister was the first blow to Khadse. He, however, kept quiet and accepted number 2 position as minister for revenue and 12 other departments. Khadse had to resign from cabinet in the wake of an alleged scam, and Fadnavis never gave him an opportunity to make a comeback thereafter. Since then, Khadse has been boiling with resentment. The denial of ticket could have been the last stroke for him, but the BJP chose his daughter Rohini so as not to upset powerful Leva Patil community.

It is reliably learnt that Fadnavis has made attempts to reach out to both Munde and Khadse. Munde is keen to get elected to state legislative council and is vying for the post of leader of opposition in the council. Khadse, on the other hand, wants to be a Rajya Sabha member.