OPINION: Fake encounters are cold-blooded murders by the police

Katju argues in the Hyderabad incident, it seems evident the ‘encounter’ was fake 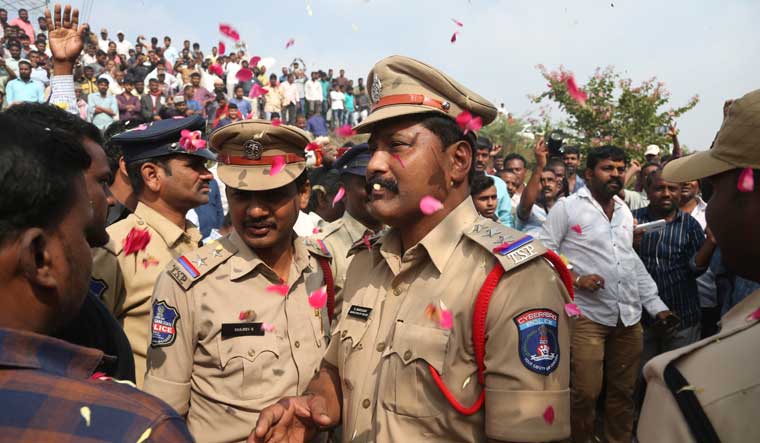 The killing of four men, who allegedly raped and murdered a woman veterinarian in Hyderabad, in an encounter by police on Friday again raises questions about the validity of the tool of extra-judicial killings devised and resorted to by a large section of the Indian police.

In the Hyderabad incident, it seems evident that the ‘encounter’ was fake. The four accused were in police custody and were unarmed. So how could there have been a 'genuine' encounter?

Encounters were widely practised by the Maharashtra Police to deal with the Mumbai underworld, by the Punjab Police against Sikhs demanding Khalistan and by the Uttar Pradesh Police after Yogi Adityanath became the chief minister in 2017.

The truth is that such encounters are in fact not clashes at all but cold-blooded murders by the police.

Article 21 of the Constitution states, “No person will be deprived of his life or personal liberty except in accordance with the procedure established by law.”

This means that before depriving a person of his life, the state is required to put up that person on trial in accordance with the provisions of the Criminal Procedure Code. In that trial, the accused must be informed of the charges against him, and then given an opportunity to defend himself (through counsel) and only then, if found guilty, can he be convicted and executed.

Fake encounters, on the other hand, completely sidestep and circumvent this legal procedure, as they really mean bumping off someone without a trial. Hence, such encounters are totally unconstitutional.

Policemen often justify encounters by saying that there are some dreaded criminals against whom no one will dare to give evidence, and so the only way to deal with them is by fake encounters. The problem, however, is that this is a dangerous philosophy, and can be misused. For instance, if a businessman wants to eliminate a rival businessman, he can give a bribe to some unscrupulous policemen to bump off that rival in a fake encounter after having him declared a terrorist.

In Prakash Kadam vs Ramprasad Vishwanath Gupta, 2011, the Supreme Court observed that fake encounters by the police are nothing but cold-blooded murders, and those committing them must be given death sentence, treating them in the category of ‘rarest of rare cases’. In paragraph 26 of that judgment, it was observed “Trigger happy policemen who think they can kill people in the name of ‘encounter’ and get away with it should know that the gallows await them.”

I will conclude by quoting from a judgment of justice A.N. Mulla of the Allahabad High Court. “I say this with all sense of responsibility: There is not a single lawless group in the country whose record of crime comes anywhere near that of the single organised unit called the Indian Police Force. Policemen in general, barring a few, seem to have come to the conclusion that crime cannot be investigated and security cannot be preserved by following the law, and it can only be achieved by breaking or circumventing the law,” Mulla had observed.