The former Congress president will address a public meeting in Simdega 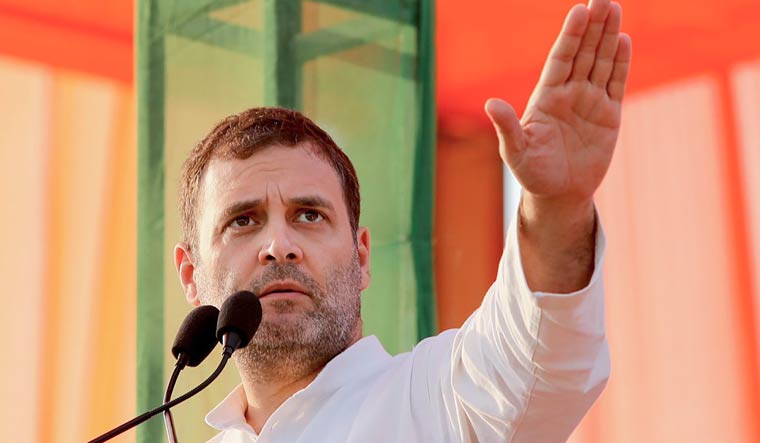 Congress leader Rahul Gandhi will address his first rally during the assembly polls campaign in Jharkhand today. The former Congress president will address a public meeting in Simdega in favour of the party's candidate Bhushan Bara who is up against BJP's Shraddhanand Besra. The Jharkhand elections is being held in five phases and the first was completed on Saturday. The JMM, the Congress and Lalu Prasad's Rashtriya Janata Dal (RJD) announced a pre-poll tie-up for the state recently with former chief minister Hemant Soren as the combine's CM face. The Congress is contesting on 31 of the 81 seats in the Jharkhand assembly, the RJD on seven seats, while the biggest chunk of the alliance's share has gone to the Jharkhand Mukti Morcha (JMM), which has fielded candidates on 43 seats.

Pakistan's Foreign Minister Shah Mahmood Qureshi will be on a two-day official visit to Sri Lanka during which he will call on the country's President Gotabhaya Rajapaksa and Prime Minister Mahinda Rajapaksa and hold discussions on bilateral ties. Qureshi, who will arrive in Colombo, during his meeting with President Rajapaksa today will also officially invite him to visit Pakistan. Qureshi will also meet his Sri Lankan counterpart Dinesh Gunawardena. Qureshi's visit comes immediately after President Rajapaksa's recent visit to India during which he met President Ram Nath Kovind and Prime Minister Narendra Modi.  Gotabhaya, 70, stormed to victory in Sri Lanka's presidential elections, the results of which came on November 17.

Leaking toxic gas from the now-defunct Union Carbide factory in Bhopal resulted in the deaths of thousands of people and left lakhs maimed on the intervening night of December 2-3, 1984. Hundreds of survivors formed a human chain in protest. The protesters said the exposure to the toxic gas and the waste dumped in the premises of the defunct factory continued to cause them health problems, and demanded that Dow Chemicals, the current owner of Union Carbide, pay compensation under the "polluter pays principle". "Because of reckless dumping of extremely poisonous waste within the pesticide factory till 1984 and outside it in 1996, groundwater has been contaminated in places over four kilometres around it," said activist Rashida Bi, who was accompanied by Champa Devi Shukla, a Goldman Environmental Prize awardee. "Since 1990, groundwater has been tested some 16 times by government and non-government agencies. These have shown pesticides, heavy metals and poisonous chemicals, including six persistent organic pollutants, at depths greater than 30 metres and distances of several kilometers from the factory," she alleged.

The biggest names in world football will descend on Paris today for the 2019 Ballon d'Or ceremony, with Lionel Messi and USA women's World Cup superstar Megan Rapinoe tipped to leave with the honours. The event will be telecast at 01:100am IST. It would be an enormous shock if Rapinoe did not depart the Chatelet Theatre with the women's prize as she returns to the country where she was the driving force on and off the field for the United States as they retained their title. The suspense surrounds the identity of the men's winner, 12 months after Croatia's Luka Modric claimed the crown thanks to his exploits in dragging his country to the World Cup final and winning the Champions League with Real Madrid. That ended a decade in which Messi and Cristiano Ronaldo had won the Ballon d'Or five times each, but the smart money now is on the Barcelona man claiming number six. There are 30 nominees in total for the prize, organised by France Football magazine and voted for by 180 journalists from around the world.

The BJP will bring an adjournment motion in the coming session of Delhi assembly, starting today, to discuss the issue of unauthorised colonies in the national capital, Leader of Opposition Vijender Gupta. Gupta alleged that Chief Minister Arvind Kejriwal has been making "false" statements about the BJP-led Centre's intent to regularise unauthorised colonies and trying to "mislead" people. Kejriwal has doubted the central government's intention to regularise unauthorised colonies and asked residents of the settlements to not believe announcements until their properties are registered. "BJP MLAs will come up with an adjournment motion. We will challenge the Delhi government to discuss and debate the issue of ownership rights being given to unauthorised colony residents, and do not use marshals on the opposition," Gupta said at a press conference. He said the central government will start the registration process from December 16.

The US' House Congressional committee will be reviewing the investigation report of President Donald Trump's impeachment inquiry today, setting the stage for charges to be filed. The House Select Committee on intelligence, who held a series of hearings in both public and closed door settings over the past few weeks, would begin deliberations on its report today. The committee is expected to consider and vote the report on Tuesday evening, which would then head to the House Intelligence Committee for it to frame impeachment charges. "This is a major event, moving impeachment proceedings one step closer to a possible impeachment trial in the Senate," The Hill reported Sunday. If Trump is impeached, he will be only the third such president in American history. "Today is the first day of a month that could define the Trump presidency. And we're heading into a critical week, as the impeachment inquiry moves into a new phase," CNN reported.

Jamshedpur FC and NorthEast United will be eyeing the top spot when they face each other in what is expected to be an exciting Indian Super League clash today. Jamshedpur are third on the table with 10 points from five matches, while NorthEast sit fourth, a point behind their opponents. A win today will be enough for either team to sit atop the table. The incentive notwithstanding, both teams have plenty of quality in their ranks to ensure the fans are in for a spectacle. Jamshedpur are unbeaten at home this season, registering two wins and a draw from three matches. Their only defeat came away to ATK, but Antonio Iriondo's team bounced back in style by defeating FC Goa at Margao and come into this clash high on confidence. On the other hand, NorthEast United are one of two unbeaten sides this season. The Highlanders, however, have not won back-to-back matches this season. They have drawn three games and won two. Robert Jarni will be hard-pressed to ensure they start putting a run of victories together.