Rafale petitioners reiterate demand for CBI probe into the deal 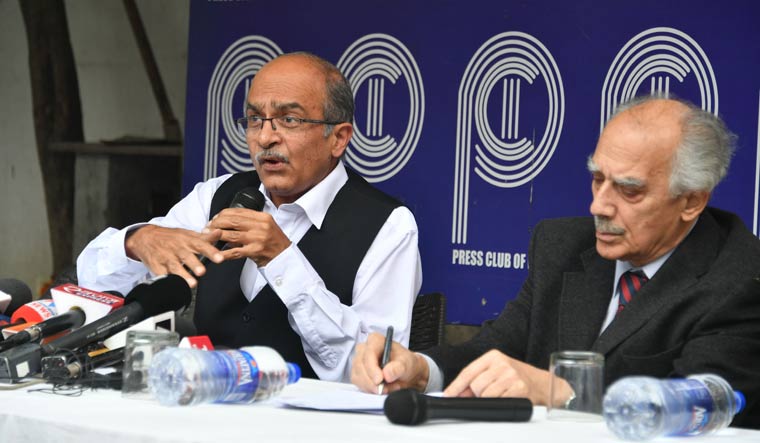 Senior advocate Prashant Bhushan and former Union minister Arun Shourie have reiterated their demand for a probe by the CBI into the Rs. 59,000 crore Rafale deal.

On Thursday, the Supreme Court dismissed petitions seeking review of its December 14, 2018 decision to reject a plea for a court-monitored probe into procurement of 36 Rafale fighter aircraft from France. The bench, headed by Chief Justice of India Ranjan Gogoi, rejected attempts by petitioners, former Union ministers Yashwant Sinha, Shourie and advocate Bhushan for a court-monitored probe in the allegations.

"Supreme Court judgement has cleared the way for the CBI to seek approval of the government under Section 17A for proceeding in that direction. We demand an immediate preliminary equiry by the CBI into allegations," Bhushan told reporters in the national capital.

Quoting from Justice K.M. Joseph's observation, Bhushan stated, "It is beyond dispute that the offences which are mentioned in the complaint filed by the petitioners are cognizable."

Bhushan, quoting Justice Joseph again, stated, "There can be no dispute that the CBI (first respondent) is the premiere investigating agency in the country which assumably employs state of the art techniques of investigation. Professionalism of the highest quality, which embraces within it uncompromising independence and neutrality, is expected of it." Bhushan further quoted the judgement, "Again, the restriction which underlines the impugned judgement is the limited scope of judicial review and also the writ jurisdiction under Article 32 of the Constitution. It is as clear as mountain stream that both these considerations are totally irrelevant for an officer who has before him a complaint making out the commission of a cognizable offence."

"We have questioned the selection process of Rafale and its technical capabilities. Our entire argument was based on the prime minister's office's unilateral intervention into the process. Apex court's judgement is based on documents given to it in a sealed cover by the government, which was not even shared with us (petitioners)."

Shorie claimed that there are enough documentary evidence to substantiate involvement of the prime minister in the deal. "From bringing down the number of aircraft from 126 to 36 and then asking Dassault Aviation to engage with Anil Ambani-owned company for offset (partnership), are clear violations that can be covered under the Prevention of Corruption Act," Shourie pointed out.

"If they (government) are clean, then what is the reason for not conducting a CBI probe," Bhuhan said.

Taking a dig at the government's Make in India campaign, Shourie said, "I think, only nimboos, mirchi and nariyal (lemon, chilli and coconut) that Rajnath Singh carried with him for the shastrapuja (weapon worship) in France was the only Make in India component in the entire Rafale deal."

Meanwhile, despite the Supreme Court pulling up Rahul Gandhi, he is still continuing with his diatribe of the deal, the BJP said.

The party said its workers will hold protests in all the districts against Congress, particularly Rahul Gandhi, on Saturday to demand an apology.

"Rahul Gandhi has been proved wrong on multiple counts when he raised aspersions on the Rafale deal. He should apologise," BJP general secretary Bhupinder Yadav said.

Yadav said even the reference to some observations in judgement and demand for holding joint parliamentary committee probe does not hold much appeal. Gandhi has been proved wrong by Supreme Court and even the public rejected his allegations as the Lok Sabha elections results proved, he added.

The issue is likely to be raised inside the Parliament when it begins the winter session on Monday.