The hospital authorities had also asked Raja Rao, Mangayamma not to talk to the media 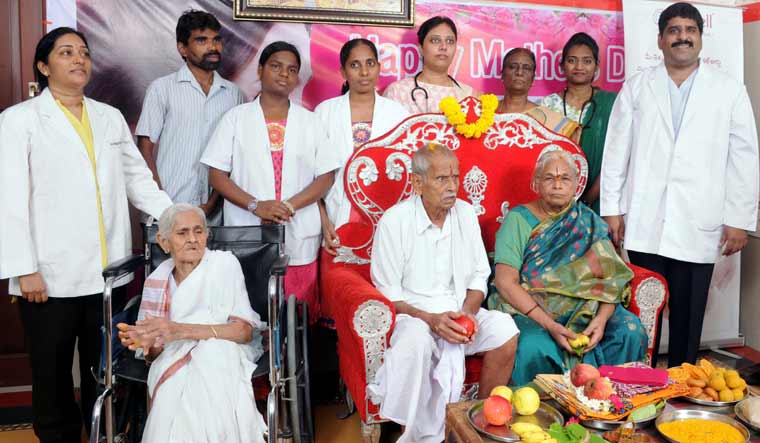 THE WEEK decided to trace the 'celebrity' parents from rural Andhra Pradesh who were among the biggest newsmakers of this year. What would have been a simple exercise turned into an almost impossible task.

A couple of months after their photographs, videos and interviews were splashed across newspapers and TV channels, Raja Rao and Mangayamma, both in their 70s, seem to have quit mainstream life after Mangayamma gave birth to twin girls in September. Their modest house in Nelaprathipadu village in East Godavari district has been locked for months.

The private hospital that had performed the IVF procedure on Raja Rao and Mangayamma is located in Guntur town. At the time the twins were born, the overenthusiastic management went out of their way to tell the world about their achievement. But that does not seem to be the case anymore.

When asked about the whereabouts of Raja Rao and Mangayamma, the replies of the doctors ranged from, “We are not sure where they are” to “They do not want to be disturbed.” Even their close relatives are tight-lipped. “They must be somewhere in Krishna or Guntur districts,” said a cousin of Raja Rao on the phone.

The after-effects of creating history seem to have pushed Raja Rao, Mangayamma and their twins into a life of oblivion. Their happiness of becoming parents at an old age seems to have been short-lived, as criticism quickly followed.

“Before Raja Rao and Mangayamma became parents, they were ill-treated; they were not invited for religious functions. They were shunned as they failed to have children. Now, they are being asked about how they will take care of the children at this age. With so much of media glare, they felt humiliated with all the questions being raised about them. They just don’t want to be in the limelight anymore,” said a villager who knows the family well.

The hospital too received its share of brickbats. The Indian Council of Medical Research (ICMR) had pulled up the private hospital and its doctors. According to a doctor in Guntur who knows the members of the hospital management well, the hospital authorities want the issue to die down as soon as possible and have asked Raja Rao and Mangayamma too to not talk to the media.

Perhaps, this is one of the reasons why the parents have not made any appearance in public or given media interviews in the recent past.

From the beginning, Raja Rao and Mangayamma made sure that very few knew what they are up to.

More than a year back, Raja Rao and Mangayamma surprised their neighbours in Nelaprathipadu when they decided to pack their bags and leave their village, their home for decades, all of a sudden.

Before doing that, Raja Rao and Mangayamma met a couple of tenant farmers and handed over their 15 acres of agricultural land. According to the villagers of Nelaprathipadu, they did not exactly understand what Raja Rao was up to as he was a farmer himself who spent a lot of time in his fields.

A few months back, the entire village was startled by the visuals of Raja Rao and his wife being played in loops on news channels.

“None of us knew that they were going through a procedure to become parents. It was only through newspapers that we got to know,” said Venkat Satyanarayana Chowdary, a neighbour of Raja Rao.

The elderly couple had decided to shift to Guntur town for the IVF procedure last year. As per Raja Rao's relatives, they stayed with their cousins during the entire period and took treatment at a private hospital in Guntur. The doctors advised the couple to stay close to the hospital since it was a critical case. As news broke that Mangayamma had given birth to twins, there were mixed reactions from all corners.

According to the local residents, the entire village was waiting to catch a glimpse of the twins, but the newborns were never brought back to the village. Many of the local residents remain clueless about the whereabouts of the couple.

“A couple of days back, I saw Raja Rao strolling in the fields for the first time since he became a father. He was alone. He inspected his fields and quickly left the village. He did not spend a lot of time. When asked about his children, he just said they are doing fine,” said a villager who did not wish to be named.

According to local reporters, Raja Rao has few relatives in his village. A few of them had attended a low-key function held at a relative’s house in Guntur where the twins were brought.

“That was the last time we heard about them. They have been keeping a very low profile since then,” said a reporter of a Telugu daily.

According to the local police, Raja Rao belongs to agricultural family that is financially well settled and was known to be friendly with the villagers. “He seems to have migrated. I don’t think he will be coming back soon,” said a police officer.

Almost everyone THE WEEK contacted and who knew Raja Rao have said that they had been unable to contact him over the phone or even meet him since he became a father.

For now, the condition of the twins or their old parents is shrouded in mystery.