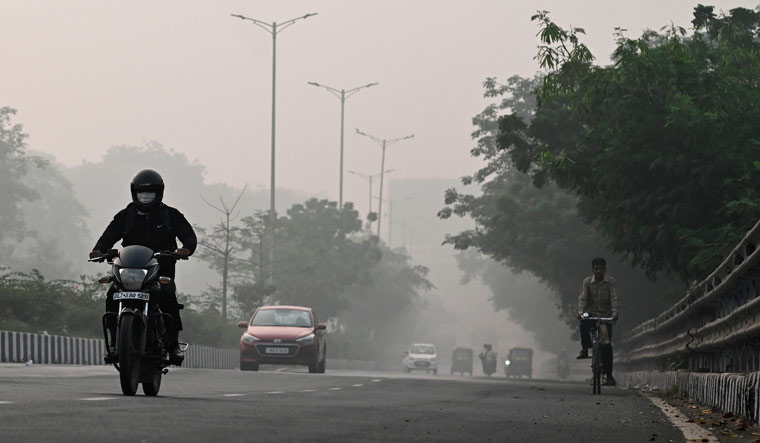 Expressing concern over the spike in pollution levels since Diwali, Delhi Chief Minister Arvind Kejriwal on Friday tweeted that the city had turned "into a gas chamber due to smoke from crop burning in neighbouring states".

It is very imp that we protect ourselves from this toxic air. Through pvt & govt schools, we have started distributing 50 lakh masks today

I urge all Delhiites to use them whenever needed pic.twitter.com/MYwRz9euaq

Kejriwal tweeted about the importance of protecting residents from this "toxic air". He announced that his government had started the distribution of 50 lakh masks through private and government schools on Friday.

In a series of tweets on the air pollution crisis in Delhi, Kejriwal blamed the governments of Haryana (led by Chief Minister Manohar Lal Khattar of the BJP) and Punjab (led by Captain Amarinder Singh of the Congress). Kejriwal claimed the "Khattar and Captain governments are forcing their farmers to burn stubble, due to which there is heavy pollution in Delhi".

Speaking to a group of children while distributing the masks, Kejriwal asked them to write to Amarinder and Khattar. "Please write letters to Captain uncle and Khattar uncle and say, 'Please think about our health'," he told the children.

Kejriwal referred to protests by Delhi residents at the Punjab and Haryana Bhavans in the capital on Thursday against the seasonal burning of stubble by farmers in those states.

Kejriwal had touted the perceived success of his government in reducing air pollution in Delhi during Diwali. On Monday, Kejriwal had declared that the air pollution level in Delhi on Diwali night was the lowest in the last five years. However, both the BJP and Congress have blamed Kejriwal's administration for not doing enough to counter pollution.