Who is Fazlur Rehman, the Maulana who could dethrone Imran Khan in Pakistan?

A massive protest, spearheaded by Maulana Rehman, will converge on Islamabad today 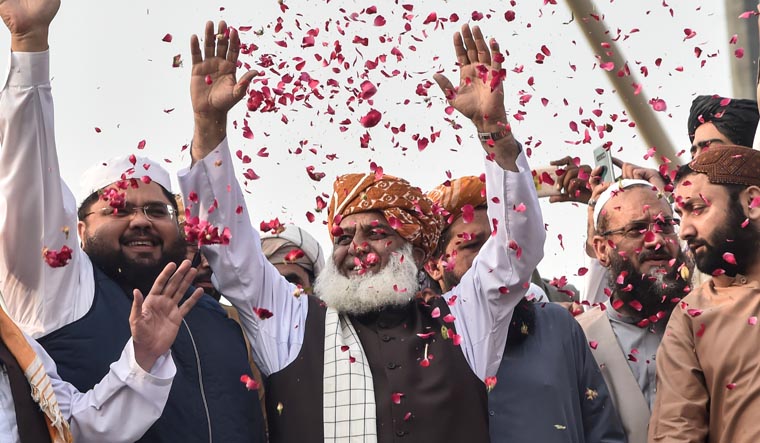 Pakistan Prime Minister Imran Khan’s famous 2014 dharna might have failed in its primary objective to bring down the Sharif government, but it had served as a powerful plank for him to ride to power on the back of an anti-corruption wave in 2018. Back then, one of his targets was right-wing Jamiat Ulema-e-Islam (JUI-F) chief Maulana Fazlur Rehman, whom Khan dubbed ‘Maulana Diesel’, according to a report in AFP, for his alleged involvement in fuel license corruption. When the poll results were announced, Rehman was among those who suffered humiliating defeats. As president of the Muttahida Majlis-e-Amal (MMA), he lost from his own constituency of Dera Ismail Khan in Khyber Pakhtunkhwa.

Fast forward to 2019. Over a lakh protesters are assumed to converge on Islamabad in an ‘Azadi March’ today, spearheaded by Maulana Rehman, demanding the removal of "selected" PM Khan. All major opposition parties, including the Pakistan Muslim League-Nawaz (PML-N) of jailed former prime minister Nawaz Sharif and the Pakistan Peoples Party (PPP) of former president Asif Ali Zardari have announced their support. Sidenote: According to reports in Geo News, the Azadi March has matched the rallies of political parties in the recent past against the government, outnumbering Khan's 2014 protests.

The animus between Rehman and Khan runs deep. The former, whom many have accused of being anti-Semitic, dubbed Khan of being a ‘Jewish agent’. Hitting back, Khan sent a legal notice to Rehman, claiming damages of Rs 500 million for defamation. After Rehman raked up a viral video, Khan had to clarify in 2013 that he would not declare Ahmadis as Muslims. “Maulana [Fazlur Rehman] thought I would declare Ahmadis Muslims but I am not a munafiq (hypocrite)”, said Khan while addressing supporters at a rally in Swabi, reported The Express Tribune.

Khan’s position now is none too enviable. Pakistan’s economy continues to be in doldrums, with the government's biggest challenge being an economy facing a balance of severe payments crisis. Within the first eight months, Khan has made visits to long-time allies China, Saudi Arabia, the United Arab Emirates and Qatar, securing $9 billion in loans to shore up the economy. But, economic woes persist as growth continues to be slow, the rupee plummeting and inflation rising beyond 10 per cent.

Add to that, there have been recent rumblings of a faction within the all-powerful Pakistan Army—which supports Khan—looking to sideline the prime minister. A meeting between the Pakistan Army Chief Gen. Qamar Javed Bajwa and heads of business without the presence of Khan, combined with unconfirmed reports about the cancellation of leave for the country’s infamous coup-starting 111 brigade, had spurred rumours that a coup was in the making. Bajwa, according to the Inter-Services Public Relations (ISPR), met with some of Pakistan’s most powerful business tycoons on Wednesday, October 2, at a session titled ‘Interplay of economy and security’.

The 111 Brigade was involved in General Ayub Khan’s coup d’etat against Iskander Mirza, General Zia-ul-Haq’s coup against Zulfikar Ali Bhutto’s government and in Pervez Musharraf's coup against the Nawaz Sharif regime. It is presently responsible for the security of the Prime Minister and the Islamabad region.

And, Rehman is an experienced political hand, opportunistic and known for his ability to compromise left, right and centre—someone who has whittled down his far-right image into an outwardly moderate one.

"The government is the result of a fake election," Rehman, flanked by his close party aides, told a press conference on Thursday. "We will gather at D-Chowk," he said, adding, "We are not ones to disperse easily." D-Chowk, also known as Democracy Chowk, is a large square located in Islamabad which is often used for political rallies and public gatherings.

"The country is under economic crisis due to the government's incompetency," Rehman said. "The current government is the result of a fake election and fake results," Rehman said. The JUI-F chief said that all opposition parties had rejected the July 25 elections and had called for fresh elections.

The JUI-F chief said that all opposition parties had rejected the July 25 elections and had called for fresh elections. "As a result of this illegal government and its incompetencies, the country's economy has sunk. Traders have shut down businesses as a result of heavy taxation. The Muslims of Pakistan are in anguish over the state of religion in the country," he was quoted as saying by The Express Tribune newspaper.

"All opposition parties agree that fresh elections should be held to find out who has the real mandate of the people," he said.

The cleric said all opposition parties have consensus on the fact that the incumbent government has come to power as result of a rigged election and that it has to go.