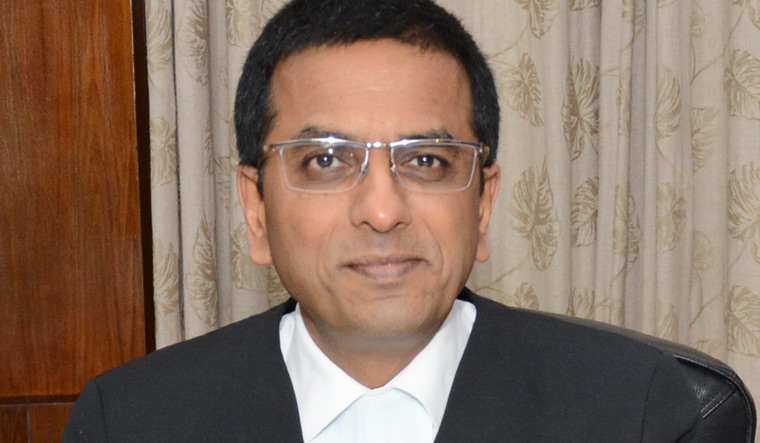 Last year on September 28, the Supreme Court of India reversed an age-old practice that banned the entry of women of menstrual age into the Lord Ayyappa Temple in Kerala's Sabarimala. The verdict, pronounced by a bench comprising former Chief Justice Dipak Misra, Justices Indu Malhotra, D.Y. Chandrachud, A.M. Khanwilkar, and Rohintan Nariman, was termed historic by one section, touting it as an important move towards gender equality, even as it evoked massive disappointment among the rest. The days and months following the verdict witnessed massive uprising against the SC judgement even as the Left front-led Kerala government remained determined to carry out the apex court's directives.

A year later, while the issue seems to have fizzled out, Justice Chandrachud has revealed that he received vile threats on social media for his Sabarimala judgement. “After the judgement, my interns, my law clerks told me: Listen, I hope you are not on social media. I said I’m not – except the WhatsApp messages I get from family and friends. And they said, ‘Please don’t. It’s scary. The amount of vile threats, abuse which you have received, it is scary’. They said we haven’t slept because we fear for the safety of the judges,” Justice Chandrachud was quoted by the Economic Times in a report. Despite the threats, Chandrachud said he stood by the judgement as the temple's practice of keeping out women was tantamount to untouchability, and a travesty to their constitutional rights that guarantee the right to freedom of worship.

However, he added that facing public ire was a part of his vocation. “It (criticism) is a part of the system. We as judges should have broad shoulders. Let people give vent to whatever they feel about a judgment, because we are dealing with difficult issues, which are difficult for us to take a call on,” he said.

“In the Sabarimala case, one of my colleagues, Justice Indu Malhotra dissented, which means there was a contrary viewpoint, and I do respect that. My law clerks said the same thing to me after the judgment. They asked me how a woman could dissent in a case about women’s rights. I told them that why should there be a perception that women should think in one particular way and men in another. We are professionals,” Chandrachud further added. Justice Malhotra's was the lone dissent judgement in the landmark verdict.