A month on, uneasy calm and uncertainty still prevail in Kashmir Valley 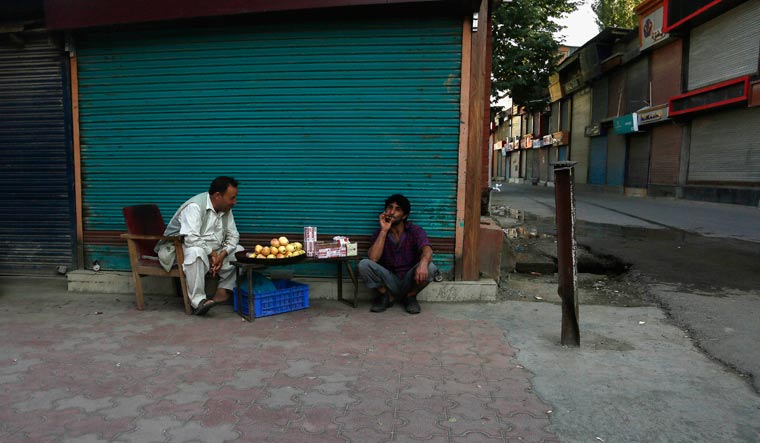 The unprecedented telecommunication blackout imposed from the midnight of August 4 may have been eased gradually and the situation in Jammu as well as Ladakh relatively better but an uneasy calm and uncertainty still prevail in Kashmir Valley.

The communication curbs were imposed after the Centre abrogated provisions of Article 370 of the Constitution on August 5 and reorganised Jammu and Kashmir into two Union territories - Jammu and Kashmir, and Ladakh.

State authorities maintain that they have eased nearly all restrictions on the daytime movement of people in Srinagar and elsewhere in the Kashmir province but life continues to be disrupted with shops remaining closed and students being away from the educational institutions.

Additional Director General of Police (Law and Order) Muneer Khan said there has not been any major law-and-order problem since August 5.

"As far as law and order is concerned, since August 5, one thing which we have ensured and have been very successful at is that no civilian casualty or any law-and-order action has taken place. The credit goes to all the forces operating on the ground," he said.

"Orders and instructions have been very clear that we have to avoid any kind of civilian casualty and we are adhering to it," he said, adding that things are improving gradually and hopefully they will fall into place and normalcy will return soon.

On the snapping of phone services, he said, "Rumour mongering triggers violence. So when we analyse the situation, we take steps to ensure that law and order situation remains under control and we have been successful so far. This was one of the main reasons why landlines and mobile services were blocked," he said.

The situation in Jammu province as well as Ladakh is relatively better following restoration of landline phone and mobile services to some extent. Unlike the valley, shops, schools and commercial establishments in these two provinces have opened.

In the valley, mysterious posters have come up which talk of "civil curfew" and asking people to enforce civil "disobedience".

There is also a fear factor after a man who had opened his shop was shot dead last week by militants.

Mainstream leaders including three former chief ministers -- Farooq Abdullah, Mehbooba Mufti and Omar Abdullah -- continue to be in detention as are hundreds of other politicians and workers of parties other than the BJP.

All of them were booked under section 107 of criminal procedure code under which a person can be kept under detention when an executive magistrate receives information that he or she is likely to commit a breach of peace or disturb public tranquillity or to do any wrongful act.

Experts like Wajahat Habibullah, a former IAS officer, has been terming the situation as "horrifying" where people do not know where their relatives are.

"It is a completely warlike situation in the Valley. Many people are saying it was wise of the government to take this step to avoid the bloodshed but I don't think this is the way. I have been in JK but we never took such extreme steps of virtually locking down everybody," Habibullah had earlier told PTI.

Mehbooba's daughter Iltija had earlier said, "My grandmother and aunt were allowed to visit my mother only after I decided to speak to the media. What about the families of those whose members have been jailed in Agra? Who will give them answers? Do they not deserve to know?" she asked.

Since August 5, the government has shifted 140 people, including rights activists, stone pelters and political activists in various prisons in Uttar Pradesh.

There is no official word about how many politicians have been detained.

But about 60 top-rung politicians belonging to several political parties except the BJP are believed to be in detention in guesthouses, their homes and hotels which have converted into jails and also in prisons both within the state and outside. Another 400 political activists are also said to be in preventive detention.