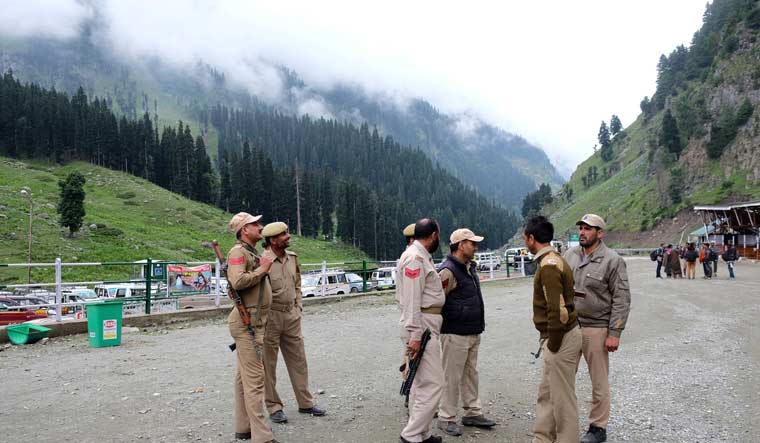 Less than a week after 10,000 personnel of the Central armed police forces were rushed to Jammu and Kashmir by the ministry of home affairs in the wake of a visit by National Security Adviser Ajit Doval, an additional 25,000 Central forces have started reaching Kashmir.

The additional forces who started arriving in Jammu and Kashmir on Thursday are being deployed in different parts of the state. With the latest induction, the number of Central paramilitary personnel deployed in the state since 2018 has surged to 75,000.

The build-up of Central forces started with the arrival of 40,000 CRPF personnel before the start of municipal elections in October last year.

The CRPF was then retained for the panchayat elections in November and December, Lok Sabha elections in May 2019 and the 45-day Amarnath Yatra that started on July 1.

Earlier, the ministry of home affairs had said the deployment of the additional 10,000 paramilitary personnel to Kashmir was “to strengthen the counter-insurgency grid as well as for maintaining the law and order situation in J&K”.

The airlift of paramilitary personnel had sparked fears in Jammu and Kashmir that the BJP government at the Centre was planning to make some big decision on the state.

Rumours spread that the additional forces have been rushed to Kashmir because the BJP has planned to scrap Article 370 and Article 35A of the Constitution that bars people from other states from buying land in Kashmir, seeking a government job and participating in Assembly elections.

The validity of Article 370 and Article 35A had been challenged by several petitioners in the Supreme Court on the contention that it violated the fundamental rights of Indian citizens from settling in Jammu and Kashmir. The petitioners—that include a rightwing-backed NGO and West Pakistan refugees living in Jammu—argued that Article 35A was discriminatory and should be struck down as it was a presidential order and not an act of Parliament.

The rumours about the BJP striking down Article 35A created a wave of fear in Kashmir that something ominous was in the offing.

The fears were strengthened by a slew of government orders asking the police to stock food, water and riot-control weapons for three to four months. An order by police to zonal superintendents to prepare a the list of mosques and their management in Srinagar reinforced fears that something serious was likely to happen.

The surge in the deployment of the Central forces has also coincided with a flare-up of the situation on the Line of Control. The Army has effectively dealt with firing by Pakistan. The clashes on the LoC this week saw an escalation from small arms and mortars to artillery firing for the first time since 2003.

The sudden surge in deployment of personnel in Kashmir has come amid a report that police posted for security duty in Kashmir have been withdrawn. Similar reports of the police withdrawal have also come from courts in Kashmir.

There are also reports of the Amarnath Yatra being curtailed with langers—makeshift kitchens that provide free food to yatris—having been closed.

There are reports that the fresh induction of Central forces also include BSF for deployment in Jammu.

Though Jammu and Kashmir Governor Satya Pal Malik has dismissed reports that the Narendra Modi government was planning to abrogate the special status of the state, the troop surge suggests otherwise.