Lindner, a musician, backpacked his way across India when he was a youngster 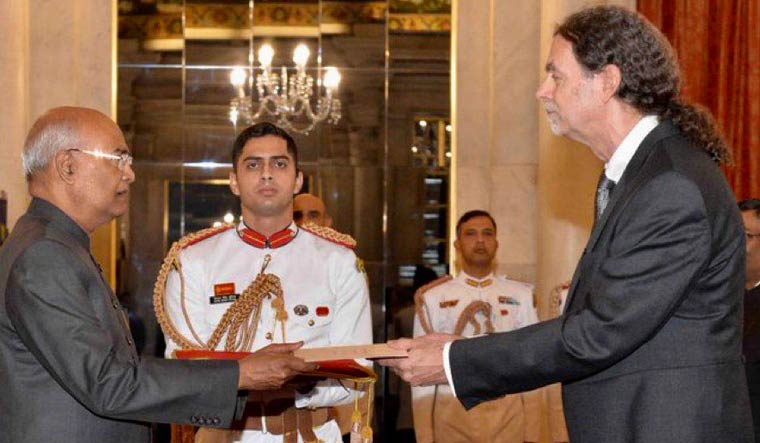 A bright red Ambassador car and a man in a frock coat, his hair tied back in a ponytail and dark glasses, was the traffic stopper on Delhi's VIP corridor on Rajpath on Tuesday. The newly-appointed German Ambassador, Walter J. Lindner, presented his credentials to President Ram Nath Kovind in Hindi and drove down the hill to a "stakeout'', where he addressed the media.

Today pesented credentials as German Ambassador to the President of India, H.E. Ram Nath Kovind. Using Hindi to do it brought a smile on the President‘s face, as did our red Amby waving the German flag to countless Delhiwallas on the streets leading to the Presidential Palace. pic.twitter.com/0Ea7EtcMKF

This is the first time that an envoy has chosen to make his first public statement on the road. Statements are certainly something Lindner likes to make. The presentation of his credentials in Hindi was out of “respect'' for the language. “President Kovind was very pleased,” he said. “He responded in Hindi. But I didn't understand. I will be better next time,” added Lindner.

Lindner has been learning Hindi for the past six-seven weeks for this very appearance. His lessons started before he came to India and have been continuing ever since. “There are many people who I speak to in India who are not fluent,'' he revealed. But more than just learning the language, his choice to use the Ambassador car, dubbed Auntie Amby, over German cars again, emphasised how important India is to Germany. “We are confident whoever will win the general elections will have strong ties with Germany,” he declared.

Lindner's Hindi might have won Kovind's approval, but his statement on India being a permanent member of the Security Council is likely to win hearts. “India must have a permanent seat in the UN Security Council... India with 1.4 billion people is not yet a permanent member; this is unheard of! This can't go on like this because it hurts the credibility of the United Nations system,” Lindner declared. Japan and Brazil must also have a space, he added.

Lindner, a musician, backpacked his way across India when he was a youngster. His Twitter timeline is filled with a younger, still long-haired, Lindner at the Beatles Ashram and sitting on a boat in Varanasi. In the past month or so, since he has arrived in India, Lindner has been on a darshan of sorts. Tracing the steps of his hippier younger days, Lindner has been to the painted havelis of Shekhawati, Agra, Rishikesh and Banaras. Lindner's connection with India began with the Concert for Bangladesh, an iconic concert to raise money for a cyclone that hit Bangladesh.

A musician, Lindner has already met many Indian musicians. He had attended a concert of Shujaat Khan and a qawali performance at the dargah. Over the last few years, each German ambassador has added a certain flavour to the diplomatic scene in Delhi. Music seems to be a theme that binds them all.

Michael Steiner, the ambassador who left in 2015, took Zubin Mehta to the Shalimar Gardens in Srinagar to perform. An ambitious, daring move, the concert—the first time such an event of that scale was taking place in the Kashmir valley—represented an idea of peace. Steiner ended his tenure in India on a Bollywood note with a video Lebe jetzt, which was a tribute to the popular Hindi movie song Kal Ho Na Ho. Former external affairs minister Salman Khurshid played the role of Saif Ali Khan and his wife, Eliese, played Preity Zinta.

The last ambassador, Martin Ney, too was deeply interested in western classical music. In his home in the red room, Ney held small private concerts for his close friends. His musical instrument of choice was the flute. His wife played music, too. Thus, Lindner is following tradition. He was fascinated by devotional music. “Chants of aartis and Sufi music,'' he said.

However, in true diplomatic form, Lindner refused to be drawn into details of how China was persuaded on the Masood Azhar issue, only offering that it was cooperation. “Terrorism should be eradicated from this earth,'' he said. On the issue of the Middle East, Lindner was a little more forthcoming. India and Germany were “exchanging notes'' and Germany would contribute in whatever way to “bring tensions down''.