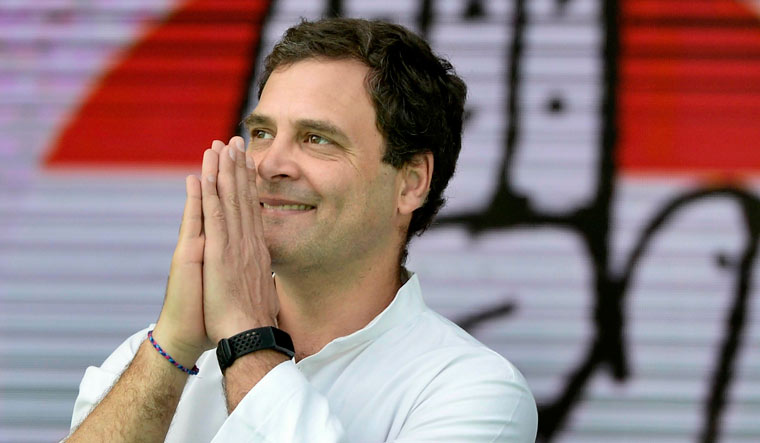 Over a spicy Andhra thali lunch, a freewheeling conversation on the problems plaguing the small and micro businesses. This was Congress president Rahul Gandhi's interaction with a group of entrepreneurs from different parts of the country as part of his outreach programme ahead of the Lok Sabha elections.

Under his 'Apni Baat Rahul Ke Saath' programme, Rahul met the assorted group of businessmen and women over a sit-down lunch on Tuesday at Delhi's Andhra Bhawan, which is famous for its authentic Andhra cuisine.

From a solar power entreprenuer to an IIT graduate who runs a business that produces sanitary napkins to a small hotel owner in Kargil to a businessman from Meghalaya, the business owners were drawn from varied backgrounds for the 'surprise' meeting with Rahul, as they were only told that they would be interacting with senior Congress leaders.

“This was such a pleasant surprise. I had no idea I will be meeting Mr Rahul Gandhi. I was just told there's a meeting where I can share my views about business,” said Khalid Ghulam Mohammaed, a hotel owner from Kargil.

Sanjay Patwardhan, a solar energy entrepreneur from Indore, said that when he gave Rahul a suggestion, he immediately called Madhya Pradesh Chief Minister Kamalnath and made Sanjay speak to him.

“I think this discussion was primarily to hear what we feel. I feel this is the way forward. This will resonate with the people,” said Suhani Mohan from Mumbai, whose business provides women access to low-cost sanitary napkins.

Among the issues raised by the participants were the problems in implementation of the Goods and Services Tax, and a common complaint was about the monthly reporting mandated under the tax regime. There was also discussion on topics such as poor infrastructure, opacity in customs duty on raw material, difficulties in getting credit, lack of incentives and problems with accessing government subsidies. The entrepreneurs said if they could get rid of red tape, they could play a key role in solving India's job crisis.

Rahul spoke about the importance of small businesses in creating jobs. He remarked that big businesses were responsible for NPAs and were not producing jobs, and yet were getting incentives, while the small and micro sector, which has the capacity to create jobs, is not getting the funding it needs.

This was the second in the series of interactions under the 'Apni Baat Rahul Ke Saath' programme. Rahul had recently met a group of students from different parts of the country, and discussed their issues over dinner at a Chinese restaurant in South Delhi.

Suggestions received from the interactions will be incorporated in the Congress's manifesto for the Lok Sabha elections.