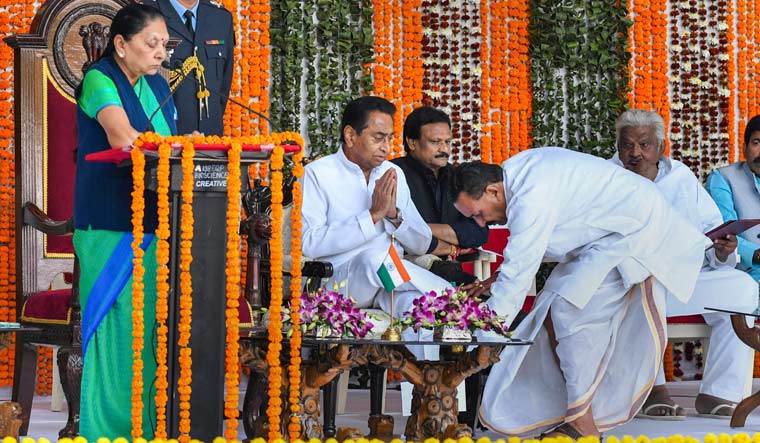 Over a week after taking charge, Madhya Pradesh Chief Minister Kamal Nath Tuesday inducted 28 MLAs, including two women and an Independent, into his Cabinet which has a mix of old and new faces, but left out BSP and SP legislators.

Governor Anandiben Patel administered the oath of office to the new ministers at a ceremony in the Raj Bhavan here attended by Nath and senior Congress leaders.

Nath, who did not contest the November 28 Assembly polls and was the only one to take oath last week, is heading the first Congress government in Madhya Pradesh in 15 years.

All the ministers, which included the son of senior Congress leader Digvijay Singh, took oath in Hindi and were accorded the Cabinet rank.

Aqueel is the lone Muslim MLA in the cabinet.

Jaivardhan Singh, the MLA from Raghogarh and the son of Digvijay Singh, was also inducted into the cabinet.

Jaivardhan Singh, 32, is the youngest minister.

Besides Sadho, another woman MLA Imarati Devi (elected from Dabra) was inducted into the Cabinet.

According to sources, the names of the ministers were finalised by state Congress leaders, including Nath, party's campaign committee chairman Jyotiraditya Scindia and Digvijay Singh, after discussions with party president Rahul Gandhi and other senior leaders.

Nath, took oath as the 18th chief minister of Madhya Pradesh on December 17, had gone to New Delhi last week and returned here along with Scindia Tuesday afternoon after holding discussions with the party leadership on cabinet formation.

Though the Congress, with 114 seats, emerged as the single largest party in the 230-member Assembly, it failed to cross the halfway mark (116) on its own and enlisted the support of the BSP and the SP, which have won two seats and one, respectively.

However, no MLA from the Mayawati-led BSP or the SP was given place in the Cabinet.

Four Independent MLAs, all Congress rebels, have also extended their support to the Nath government, taking the total number of MLAs on the Congress side to 121.

Meanwhile, supporters of senior Congress MLA K P Singh (Pichhore) staged a protest outside his Bhopal residence demanding his inclusion in the cabinet.

Later in the evening, an informal meeting of the newly formed Cabinet was convened at Indira Bhawan, the PCC headquarters.

On the other hand, a Congress spokesman said the MLA from Gotegaon, N P Prajapati, would be the party's candidate for the post of Speaker.

The first session of the newly elected Assembly is slated to begin from January 7 during which MLAs will take oath.