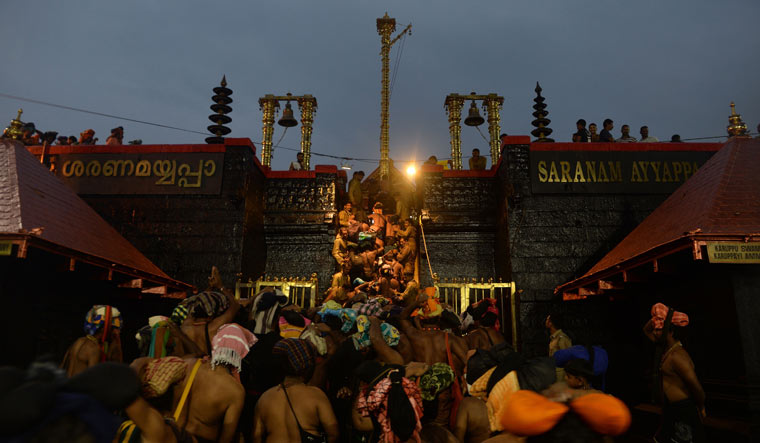 The Sangh Parivar will take on the Pinarayi Vijayan government's plan for a 'women's wall' on the Sabarimala issue by organising an 'Ayyappa jyothi'—the simultaneous lighting of Ayyappa lamps from Manjeshwaram in the North to Parassala in the South—during dusk on December 26.

Already, the Vijayan government has suffered a major public relations setback. Popular actress Manju Warrier, who had initially supported the women's wall initiative, took a dramatic U-turn and said she did not wish to lend her name to an event coloured by politics.

Further, perhaps hoping to keep the 'fire' of the Sabarimala agitation alive in devotees, Nair said that the women's wall was a sly attempt to sneak women into the temple shrine. “All Ayyappa devotees should be part of the Ayyappa jyothi,” he said.

The lighting of the Ayyappa jyothi is planned as a mass but solemn event to reflect the popular appeal of the movement opposing women's entry to Sabarimala. A top source said the BJP had been asked to keep a low profile. There is a feeling within the Sangh Parivar that the BJP's recent aggressiveness in the Sabarimala issue, including organising two hartals in quick succession, has not gone down well with the public.

Officially, it is claimed that the Ayyappa jyothi lamp lighting is organised by 120 Hindu organisations, including the Sabarimala Karma Samithi. The BJP will stay in the background, to keep the political angle very subtle. But the general feeling within the Sangh Parivar is that a successful Ayyappa jyothi event would give the BJP a huge political advantage.

BJP state president P.S. Sreedharan Pillai has already sought to differentiate between the women's wall and the Ayyappa jyothi. “The jyothi is a coming together of people cutting across the boundaries of caste and religion. The wall, on the other hand, is an attempt to harvest the gains of division and hatred,” Pillai said.

The jyothi event is also logistically less daunting. Unlike the women's wall, which the LDF leaders had said would be one unbroken wall from north to south, the Ayyappa jyothi plan has been drawn up for easy execution. The lamps will be lighted only along the sides of highways. And to ensure maximum participation, the event will be held within a small window of half-an-hour, between 6pm and 6.30pm.

The timing has been chosen with the clear intention of mobilising as many women as possible for the event. It also coincides with the temple timings in most places across the state.

The Sangh Parivar has left nothing to chance. Coordination committees have been formed at the village level. Besides popular Hindu organisations like the RSS and Hindu Aikya Vedi, NSS karayogams, too, will be pitching in. Each area has been assigned its stretch of national highway. There will be no slogan shouting, the participants have been told. Only Ayyappa chants will be allowed.

Sources said the objective was to revive in the minds of devotees the instinctive sense of injustice they had felt on hearing the Supreme Court verdict on women's entry into Sabarimala on September 28.