Bhagwat said RSS is not working for any particular political party 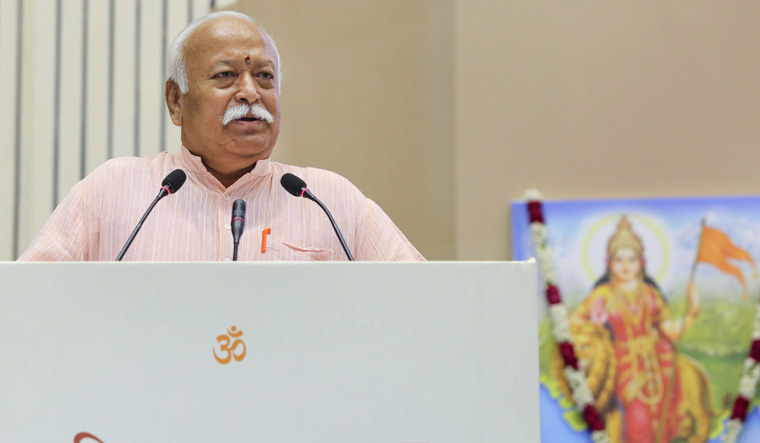 RSS chief Mohan Bhagwat speaks on the 2nd day at the event titled 'Future of Bharat: An RSS perspective', in New Delhi | PTI

Often criticised for its “conservative” Hindu world view, the Rashtriya Swayamsevak Sangh chief Mohan Bhagwat on Tuesday presented an inclusive definition of Hindutva which, he claims, not only respected diversity, but also celebrated it. Bhagwat said Hindutva means inclusivity and accepting Muslims is a part of it.

The RSS chief denied the Sangh's interference in the government's policymaking, while distancing it from a political role. He also expressed faith in the Constitution.

“There are three tenets of Hindutva: patriotism, pride in one's ancestry and culture. People may belong to different religions or sects. But the respect for this diversity that does not lead to any discrimination is Hindutva,” Bhagwat said in the second of his three-day lecture series. He spoke extensively on Hindutva as a concept, which is otherwise seen as a political aspect of the Hindu religion, and a cause of political polarisation in the country.

According to Bhagwat, the reason why Sangh works for the Hindutva was the fact that this was the only philosophy which was inclusive and respected diversity. “Even when someone talks about Muslims going to Haj, they are referred to as Indian Muslims; the Indian philosophy is called Indic thoughts, and people belonging to this country are called Bharatwasi. These are all synonymous. They talk about same thing. This means Hindu,” the Sangh chief said.

“Hindutva is not only for Hindus, it's for the world and humanity, be it Sikh, Jains, Buddhists, who all were born here. We never saw state and nation as same. States can come and go, but nation, which is a cultural concept, stays. We believe in that,” Bhagwat elaborated.

While talking about a common ancestry and shared culture, Bhagwat said, “If we don't accept Muslims, it's not Hindutva. Hindutva is Indianness and inclusion'”

Bhagwat's statement is likely to send out a message to the aggressive Hindutva forces who attempt to seclude the Muslims.

In recent times, Bhagwat has attempted to present an elaborate definition of Hindutva as a concept. His lectures are aimed at clearing air over Sangh's philosophy and working style which is often attacked for being communal, conservative and at variance with the Constitution of the country.

He read out the Preamble of the Constitution to say how the philosophy of the Sangh was aligned with it. “Since the beginning of the Sangh, we have agreed that Constitution presents the consensus of the nation, and we follow the discipline it creates.”

The RSS chief's statements came days after Congress president Rahul Gandhi compared the Sangh to the Muslim Brotherhood which attempts to subjugate minorities and impose a conservative interpretation of Muslim religion.

Though, Bhagwat did not refer to Gandhi's statements, he appeared to answer some of the main concerns raised against the functioning of the Hindutva body. He disassociated the Sangh from the political and ideological divisions saying its purpose was different.

“A question is often asked if the Sangh has political ambitions. Aim of the Sangh is to unite the society. A political party works with different ideologies and compartments. No RSS office bearers can contest elections or be part of any political party. This has been the view of the RSS since the beginning. But (that) doesn't mean we don't articulate our views on issues which concern the nation,” he added.

“We don't tell our cadre to go for one political party or help them. Swavyamsevaks are independent to help political people based on their reasoning. We don't have any enmity against anyone or over friendliness with any political party. We are not exclusivists,” Bhagwat said.

While ruling out the Sangh's interference in governance, Bhagwat said, “It is wrong to say that phone calls must be going to a political party (read BJP). Most of those leaders are either of my age or senior to me. They don't need our recommendations. But there are courtesy phone calls.”