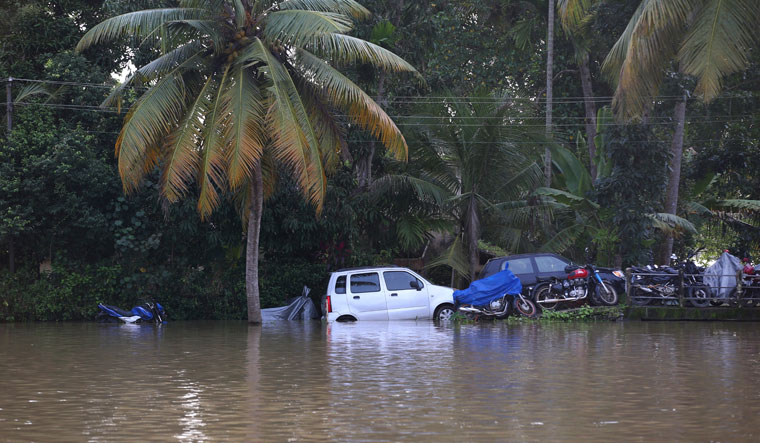 Vehicles submerged by the flooding in Alappuzha | AP

Now that the rescue work from the Kerala floods is almost over, here comes the next big shock of the great deluge: The state will have to abandon all its development plans for a year, with the chief minister stressing the state's “survival” was at stake.

“But this is a highly conservative estimate. A more realistic assessment of the damage after the flood waters fully recede and a truer picture emerging will raise it considerably further,” Vijayan said. The gross plan outlay for 2018-19, including Central share, is Rs 37,284 crore. “This is why it looks like we will have to spend the entire plan outlay for this fiscal to tide over the devastation,” Vijayan said.

The damages are only a part of the revival process. “Bringing life back to normalcy is as big a challenge as reconstruction. People will have to return to their houses and resume normal life, and for this, many things have to be put in order, be it sanitation, power, water supply and many such things,” Vijayan said.

“And to this reconstruction and restoration process, add the environmental destruction the floods have wrought. It looks like we need a gargantuan sum equal to the five-year plan of the state,” he said.

Vijayan said this was why he had always said that Central help of any magnitude was welcome.

“Our survival is at stake,” he said. Vijayan also called for a massive step-up in public contributions. As on August 20, the Chief Minister's Distress Relief Fund has Rs 210 crore, including Rs 45 crore received online. Vijayan said an additional Rs 160 crore had been promised.

He said organisations were coming forward to help in other ways, too. The Confederation of Indian Industry, for instance, has promised to restore 1,000 houses that have been damaged in the floods.

The Uralungal Labour Contract Cooperative Society has promised to provide the services of 200 electricians and plumbers to help in the restoration process of houses in Chalakkudy area.

Vijayan said funds should be sent to the Chief Minister's Distress Relief Fund and nowhere else. He warned against parallel fund collection drives. “It has come to our notice that funds are being collected in the name of local distress relief funds. Strict action will be taken against such collections,” he said.

Vijayan said that all relief materials should be handed directly to the officer-in charge at relief camps.

“We will not allow people to provide relief to only those they choose,” Vijayan said. He said the insistence of certain organisations to enter a relief camp with their badge would also be prohibited. “All relief should be handled only in cooperation with the officer-in charge at the relief camp,” he said.

'Rescue will be on till last person is saved'

The search and rescue activities will continue till the last stranded person is brought to safety, said Vijayan. The first phase of the rescue mission has been completed, he added.

With a major cleaning drive ahead, each panchayat ward will get Rs 25,000 for the purpose. Wards in city areas will be given Rs 50,000 each. The Kerala State Electricity Board will waive reconnection charges.

Power supply to 26 lakh consumers was affected during the floods.

The Centre has allotted 50,000 tonnes of food grains for the state. A kitchen should be arranged in each camp to cook the food needed.

Vijayan said that at least one doctor should offer services at the camp. Those who need further medical attention will be referred to a hospital.

The government has decided to supply a kit containing essential items to each family returning to their house. In case currency notes were damaged, the Reserve Bank will issue new ones.

Vijayan said fisherfolk who took part in the rescue operations will be honoured at a function to be held in the state capital on August 29.