Interview: When Vajpayee talked about Hindutva, Muslim support for BJP 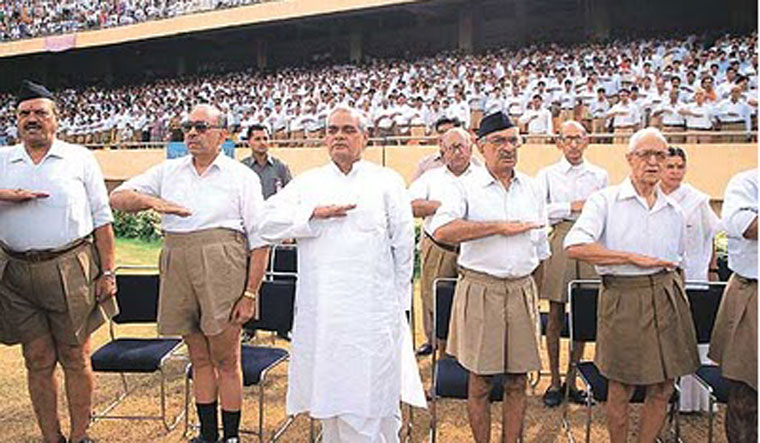 This interview originally appeared in the issue of THE WEEK dated January 11, 1998

In Gujarat, Atal Bihari Vajpayee is twice as popular as L.K. Advani and three times more than Murli Manohar Joshi. Every time Vajpayee visits the state, people become euphoric. And so it was on his visit to Surat on December 26, 1997. Excerpts from an interview with the BJP's candidate for prime minister:

What is the BJP's main agenda in the elections?

Stability is going to be a decisive factor. The United Front government was not able to provide stability. The Congress also failed in providing stability. People now feel that only the BJP-led alliance can provide a stable government.

'Stable' does not mean maintenance of status quo. The government should be dynamic and committed to the welfare of the people. Some of the United Front policies resulted in disastrous consequences.

Has the BJP moved away from the Hindutva agenda?

There is no question of moving away from Hindutva agenda. But we do not want to project this after the Supreme Court's verdict. Hindutva is a way of life.

A newspaper report claims Sonia Gandhi is in touch with you...

There is no truth in the report.

But her supporters are coming close to the BJP.

(With a smile) I do not know whether she has any supporters.

Is the BJP projecting you for prime ministership only to attract Muslims to the party?

No, I don't believe this is the only reason. Muslims have realised that so far political parties have misused them. Nobody has done anything concrete for their economic welfare.

But why is it said that there is a sudden change in the Muslims' attitude towards the BJP?

The change in the attitude of Muslims has not been sudden. They have been witnessing the failure of different political parties.

The Shahi Imam recently said that Muslims were safer in BJP-ruled states.

It's fine if he has had a change of heart and mind.

During the political crisis in Uttar Pradesh, the BJP was vehemently against dissolution of the assembly. But a few days ago, when a similar situation arose in Gujarat, the high command chose to remain silent. Why?

The situation in Gujarat was altogether different. There was no government at the Centre and Parliament was not in session. I think there was nothing wrong in dissolving the assembly. But how can Parikh's government continue as caretaker government? president's rule should be immediately imposed in Gujarat.

Was Vaghela's ambition responsible for whatever happened in Gujarat?

No. It was the lack of management on our part.

Was not some person responsible for this?

All of us were responsible. We are honest to accept it as our mistake. But mistakes are not necessarily repeated.

The BJP attempted to form a ministry in Gujarat by obtaining support from RJP MLAs...

Yes, there was a claim and the governor could have considered it. But now that chapter has been closed and we have got a chance to go to the people again and tell them that they have an opportunity to elect a stable and transparent government. We have been against the use of Article 356, but I feel Gujarat is a most appropriate case to invoke Article 356.

Don’t you think after the Uttar Pradesh episode, BJP's claim of being a 'clean party' sounds hollow?

Whatever happened in Uttar Pradesh was the correct thing. There was a conspiracy to deprive the BJP of power. The governor was a party to that conspiracy. The people from other political parties, who joined hands with the BJP, did not do so to share power. They wanted the assembly to function. They wanted to do away with president's rule. The governor, who is incompetent and corrupt, should not be allowed to hold the post.

What is your opinion on Prime Minister Inder Kumar Gujral’s foreign policy?

(Smiling) In 1977-78 as foreign minister, I tried to establish friendly relationship with our neighbours. Gujral's policy on Pakistan has failed.

Many politicians are joining the BJP these days. Don't you think it will have a negative impact on the image and character of your party?

I don't think it will change the character of the BJP. We have not promised them tickets in the elections. They are joining the BJP because the party has emerged as a major political force. Earlier, it was the Congress versus the rest of the parties. Now, it is the BJP versus the rest. The BJP is the only all-India party.

Is the BJP not capable of fighting alone?

That is not the case. In fact, we have a problem: if we go it alone, we are said to be isolated; if we gather support of some political party, we are accused of playing foul.

The way various forces are making a mockery of democracy, don’t you think the time has come to amend the Constitution?

Yes, we must rethink about the structure of the Constitution. We have already demanded the setting up of a high-power committee to do this. The present system is not working because we have too many political parties. If we want stability, the number of political parties should be reduced.