From Pokhran to Agra, how Vajpayee manoeuvred India's foreign policy 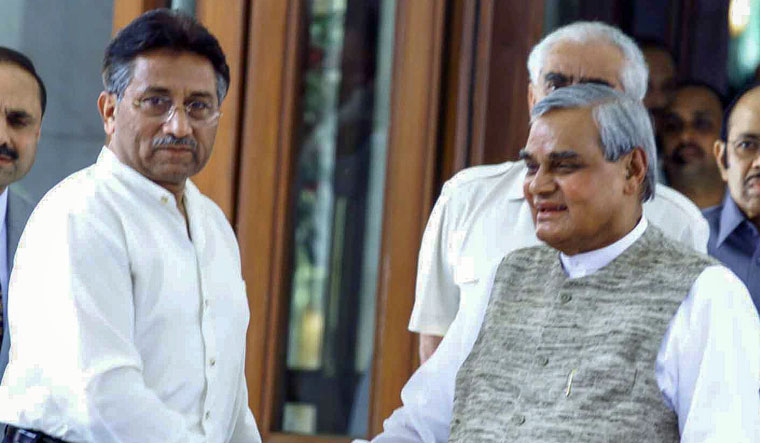 [File] Former prime minister Atal Bihari Vajpayee shakes hands with the then Pakistani President Pervez Musharraf shortly before the start of the Agra Summit in Agra in July, 2001 | PTI

India may have fought the Kargil war during his prime ministership, but across the border, Atal Bihari Vajpayee stands tall, a gentleman politician, who sincerely strove for peace in the sub-continent. He didn't just mouth platitudes, says Imran Ghori, a Pakistani journalist. “He actually acted upon them, by taking a bus to Lahore through Wagah.”

Though the nuclear tests, early in his prime ministership in 1998, were retaliated with a similar set of tests in Pakistan, making alarmists to believe that the region would annihilate itself, Vajpayee was only looking for peace. His historic initiative, the Lahore bus journey is among those memories for a generation of Lahoris which remain crystal clear, even during times of bitter hatred. Those are memories of Vajpayee hopping off the bus, with 22 eminent citizens of India, including Pakistan born Dev Anand and Kuldip Nayar. The joyous bhangra at his reception and the Pakistan Rangers band still ring clear in those memories.

Vajpayee went a step further literally. He visited Minar Pakistan in Lahore, the only Indian leader to do so. This was the site where the All India Muslim League passed the Lahore Resolution of 1940.

The effort was ephemeral, unfortunately as the Kargil conflict happened within months. Vajpayee, for all his friendliness a few months ago, remained adamant during the Kargil conflict. He visited the soldiers in their bunkers, encouraging them. And he demanded an unconditional withdrawal from Pakistan when the US tried to broker peace.

Yet, the seeker of peace and friendship was ready to give another shot two years later. Pervez Musharraf, known as the architect of the Kargil conflict, was now Pakistan's president. Despite the betrayal Vajpayee must have felt, he invited Musharraf over for the famous Agra summit, where the draft of the Kashmir solution was ready. Why it wasn't inked at the last moment is one of those points on which experts will speculate for years. But all agree that the two countries, which were within the reach of peace, had missed their best chance till date. “But it was the first time that the two countries had actually reached the stage of getting a draft ready,” says Ghori.

Although his Defence Minister George Fernandes declared that China was India's prominent threat, shortly after India tested its nuclear capability at Pokhran, Vajpayee's outlook towards China was neither too hostile, nor too wary.

However, China condemned India's nuclear tests, and China is said to have helped Pakistan conduct its tests within days. Alarmists whipped up scary scenarios of the sub-continent imploding with nuclear wars, and India herself faced sanctions.

Vajpayee visited the US four times during his tenure, paving the way for his successor Manmohan Singh to ink the crucial India-US nuclear deal. Vajpayee was the first to refer India and the US as “natural allies”. The term surprised many back then. One should remember that, he was of a generation which regarded the CIA as reponsible for many explicable and inexplicable events in India. Today, the US embassy in its condolence message said: “During his tenure prime minister Vajpayee advocated for a robust partnership with the United States, referring to us as 'natural allies'.”