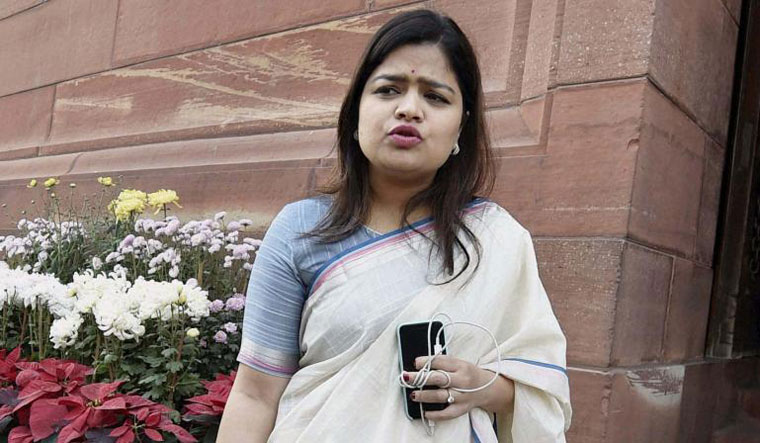 The Bharatiya Janata Party has found a woman face for West Bengal to deal with Chief Minister Mamata Banerjee. Poonam Mahajan, BJP's Yuva Morcha president, will be attending a big rally on Saturday at Kolkata's Mayo Road, which would be addressed by party's national president Amit Shah.

The meeting is seen as an answer to Banerjee's Martyr day rally in Kolkata on July 21. Shah was supposed to come to Kolkata on May 3, but his visit was called off due to some preoccupation in other states.

A tug of war has already begun in Kolkata with BJP's posters scattered all over the city. Interestingly, each of such posters—be it photos of Shah or Poonam—was followed by another poster of ruling Trinamool Congress which says, "Anti-Bengal BJP, go back."

It was 20 years back when Poonam's father, Promod Mahajan, a close associate of then prime minister Atal Behari Vajpayee, came to Kolkata and attended the same martyr day meeting in 1999 when Banerjee was supporting the NDA government from outside. Banerjee, however, had exerted huge pressure on the Centre demanding a "Bengal package". She even threatened to withdraw her support to the Union government, which would have become minority government then. An alarmed Vajpayee sent his trusted Mahajan to Kolkata.

Banerjee then said that she had supported BJP on the condition that it would give her a “Bengal package”, though she was not the chief minister of the state at that time. Many left leaders in the state supported her move.

Mahajan, then political adviser of Vajpayee, came to Kolkata and attended the martyr day meeting of Banerjee and said that the prime minister had accepted all demands of the Trinamool Congress chief.

"When you get so many things while living outside, why don't you come inside our house and get everything?" Late Promod Mahajan then asked Banerjee.

History has come back, but in a different way. Mahajan's daughter Poonam would come to Kolkata on Saturday to play a role, exactly opposite to what her father played two decades back.

A senior BJP leader in West Bengal said, "The daughter would undo what her father did." BJP leaders in the state said Poonam would make series of visits in the coming months to West Bengal.

"She is a good speaker and a good organiser as well. She is a woman and would be rightly pitted against Banerjee," said the leader.

All eyes are now on Saturday's rally of Shah and Poonam in Kolkata.

Meanwhile, Trinamool Congress has decided to observe a black day in West Bengal on Saturday to protest against the NRC draft list in Assam. So, there is a possibility of confrontation.

Kailash Vijayvargava, state prabhari of BJP, has warned Trinamool Congress. "Don't play with fire. There will be Lanka Kanda if anybody tries to oppose us tomorrow (Saturday)," Vijayvargava, BJP's national general secretary said.

Shah will come on Saturday at 11am. He would move to Port Trust guest house in Kolkata and meet the party leaders before heading to the rally venue. He is likely to go back to Delhi in the evening.