This monsoon session most productive for Lok Sabha since 2000

Lok Sabha worked for 110 per cent of the scheduled hours 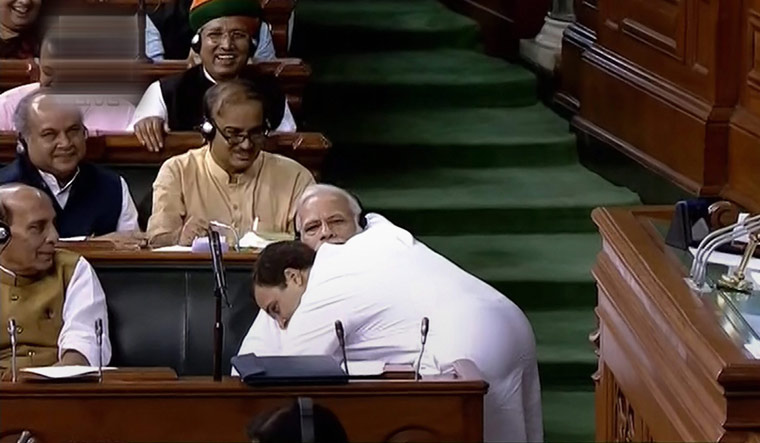 The monsoon session of the Parliament ended on a good note for the government. Not only did it win the no-confidence motion, it got its own candidate elected as the deputy chairman of the Rajya Sabha. The current session also saw the strength and weakness of the opposition unity, showing which all are likely to stick together and who have already distanced themselves and gone closer to the NDA.

In all, 20 bills were introduced during the session and 11 were passed. Lok Sabha worked for 110 per cent of the scheduled hours and Rajya Sabha for 66 per cent, according to the data compiled by a legislative think tank, the PRS legislative. It said the current monsoon session was the most productive session for Lok Sabha since 2000.

But the historic moment in the current session was the 'hug and wink.' Congress chief Rahul Gandhi's hug for Prime Minister Narendra Modi which, the former claimed, was aimed at lowering political hostilities, sparked off a slugfest between the ruling BJP and the Congress, which will only escalate in the coming days. It was during the 27th no-confidence motion moved in the history of parliament. The motion was discussed for nearly 12 hours by 51 members, which did provide for some good scenes of elocution of the current Lok Sabha.

JD(U) MP Harivansh Narayan Singh won comfortably in the election of the Deputy Chairman of the Rajya Sabha. TRS, BJD and AIADMK voted in favour of the government, thus showing these parties' growing closeness with the BJP. The U-turn by the TRS was more dramatic as earlier the party had given a call for the federal front against the BJP government. As the talks progressed among the opposition parties, the Telangana Chief Minister K. Chandrashekhar Rao-led TRS jumped the ship.

The other significant issues discussed inside the houses were misuse of social media to spread violence, the final draft of the National Register of Citizens in Assam, and the non-implementation of the Andhra Pradesh Re-organisation Act, 2014.

The key bills passed during the current session include the SC/ST amendment bill which seeks to overturn the Supreme Court judgement, which had led to massive protests by the dalit groups. Another key bill was on providing constitutional status to the OBC commission.

“So far in the 16th Lok Sabha, the average productivity of Lok Sabha is 86 per cent and that of Rajya Sabha is 67 per cent. This was the most productive monsoon session of Lok Sabha since 2000. However, Rajya Sabha lost time due to disruptions (including on account of protests against Assam’s draft National Register of Citizens),” the PRS note said.