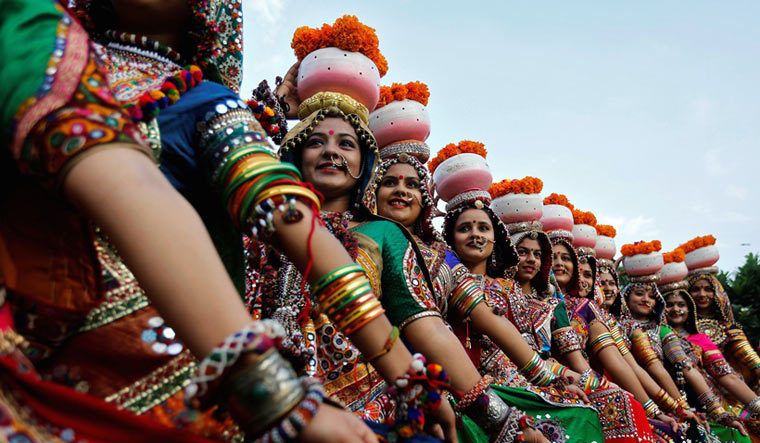 Navratri festival of Gujarat is world famous and the preparations for it begin much in advance. Prime Minister Narendra Modi has referred to Navratri as world's longest dance festival that goes on for nine nights.

This year, however, the festival is in the news for all the wrong reasons. The BJP-led Gujarat government's decision to give vacation to schools, colleges and universities during the festival met with opposition from various quarters.

The festival begins on October 10. In an apparent goof up, minister of state for education Vibhavari Dave announced that the vacation would be from October 15 to 21. Surprisingly, Chief Minister Vijay Rupani, who was in Rajkot, remarked that he was not aware about it.

The government later changed the dates of vacation even as private schools, colleges and universities strongly opposed the move.

Education minister Bhupendrasinh Chudasama said that the vacation would be from October 10 to 17. After Dusherra on October 18, the examination of class IX will be held from October 19. Having given vacation during Navratri, the state government has cut short the Diwali vacation by a few days.

Chudasama said that the decision was taken following representations from various quarters. Government officials said that it has been observed that there is less attendance in schools and colleges during the festival.

Nidat Barot, dean of education faculty, Saurashtra University, while talking to THE WEEK asked as to how the syllabus of first semester can be taught in the second semester. Giving vacation would affect the number of days of education by 12 to 13 per cent, he said, adding that the state government should have consulted schools and colleges before taking any such decision.

Chudasama, however, said that the numbers of days of studies remain unchanged during the academic year.

Jatin Bharad of private schools association from Rajkot said that they would make a representation before the state government. If the government is giving vacation, it will also have to change the dates of examination.

The schools and colleges argue that the examination dates and syllabus are decided well in advance. Giving vacation would affect the education, they feel.

It is for the second time that the BJP has given vacation during Navratri festival. In 1995, it was given for two years during the tenure of Keshubhai Patel as the chief minister.