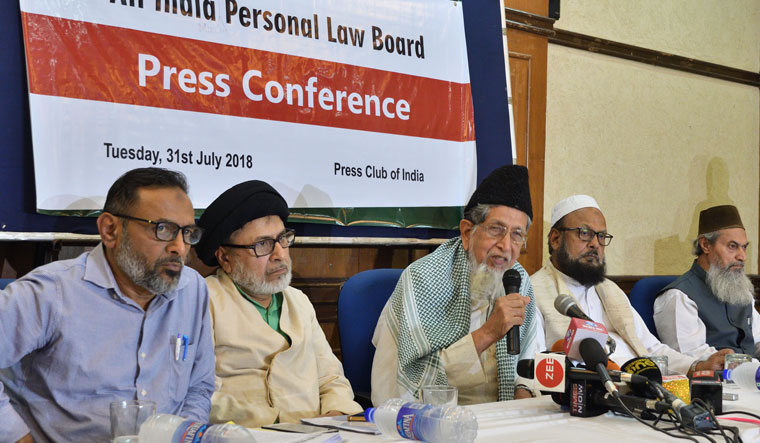 All India Muslim Personal Law Board today condemned the proposed triple talaq legislation, calling it a ploy by the ruling dispensation to give the Muslim community a bad name and fill the country's jails with Muslim men.

In an angry reaction to the government's efforts to pass the Muslim Women (Protection of Rights on Marriage) Bill, 2017 or the Triple Talaq Bill in Parliament, AIMPLB criticised the Modi regime for not consulting the community on the proposed legislation.

“The government says that the bill is in the interest of women. However, the board believes that it is against women, against couples. We condemn it strongly,” said Fazlur Rahman Mujaddidi, secretary, AIMPLB.

“Why do they want to make triple talaq a cognisable offence? This is a ploy to give Muslims a bad name and fill the jails with Muslim men,” Mujaddidi said.

Board member Kamal Farooqui questioned the need for a law criminalising triple talaq as the Supreme Court has already declared it unconstitutional and hence illegal. “As of today, under the law of the land, triple talaq is not valid. How can you make an action that is not valid a cognisable offence? Only this government could have done something like this,” he said.

Farooqui further claimed that the government's agenda is to project the Muslim community as the 'bad boy' and give the religion a bad name. “In such a situation, it becomes important for us to give our point of view,” he said.

Board members claimed that the Law Commission Chairman Justice B.S. Chauhan reportedly told them that even he had not been consulted on it.

The Triple Talaq Bill, which the government introduced in Parliament to operationalise the Supreme Court's judgment declaring instant triple talaq unconstitutional and hence illegal, has generated a lot of controversy with critics questioning the intent of the ruling dispensation in proposing such a law. The major criticism is that the bill criminalises and makes a cognisable offence something that is in the realm of civil law.