Sonam Wangchuk was THE WEEK Man of the Year in 2001 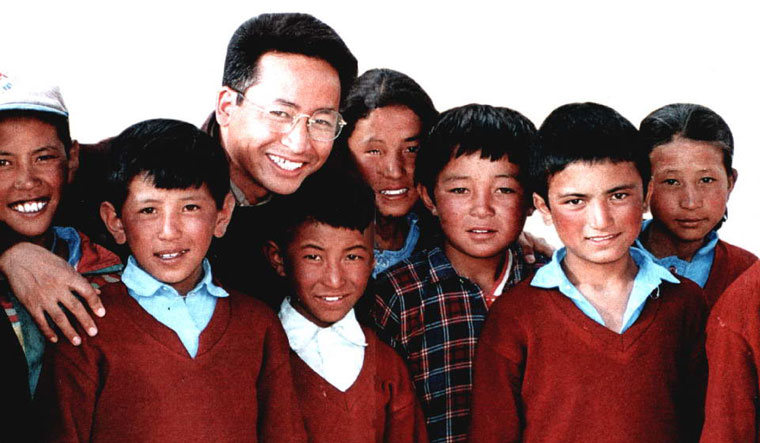 Two Indians—Sonam Wangchuk, whose initiative to harness science and culture creatively for economic progress improved the lives of the Ladakhi youth, and Bharat Vatwani, a psychiatrist who works for the mentally-ill street persons—were today declared the winners of this year's Ramon Magsaysay Award.

Sonam Wangchuk was THE WEEK Man of the Year in 2001. He becomes the third Man of the Year awardee to win the Magsaysay Award, after Baba Amte (2008) and Rajendra Singh (2001). In fact, in the Aamir Khan-blockbuster 3 Idiots, Khan's character of Phunsukh Wangdu was inspired by Wanchuk.

Wangchuk, 51, was recognised for "his uniquely systematic, collaborative and community-driven reform of learning systems in remote northern India, thus improving the life opportunities of Ladakhi youth, and his constructive engagement of all sectors in local society to harness science and culture creatively for economic progress, thus setting an example for minority peoples in the world," the citation said.

Reacting to the news, Wangchuk said, “Few days ago I received an unknown call from the Philippines to tell me that they were going to confer on me the Ramon Magsaysay Award, for working to improve lives of minorities in the mountains. Apparently they had done a year-long research work on me already, including visits to Ladakh. And this morning they formally announced it in Manilla!

“I honestly don't feel I deserve it alone as an individual! It belongs to every student, every teacher, every leader and every dreamer in Ladakh. So, I congratulate and thank each and every Ladakhi alive ... and even our ancestors who taught us... to care for nature and care for others before self. I was only humbly trying to apply these learnings in life,” he said.

“In fact it is an occasion to express gratitude to the whole nation and the world for understanding that minorities in the mountains face special challenges, they are not only ethnic and linguistic minorities but also environmental, educational and technological minorities, where normal readymade solutions and policies from the plains don't even work.

“Therefore, I hope this award will give a boost to our work of engaging mountain youth in finding indigenous solutions to mountain peoples' problems. I hope it will also help our efforts to set up the Himalayan Institute of Alternatives, Ladakh ( HIAL) as an alternative university for the mountain development,” Wangchuk said.

Wangchuk was a 19-year-old engineering student at the National Institute of Technology in Srinagar, when he went into tutoring to finance his schooling and help woefully unprepared students pass the national college matriculation exams.

In 1988, after earning his engineering degree, Wangchuk founded Students' Education and Cultural Movement of Ladakh (SECMOL) and started coaching Ladakhi student, 95 per cent of whom used to fail the government exams.

In 1994, with Wangchuk in the lead, Operation New Hope (ONH) was launched to expand and consolidate the partnership-driven educational reform programme.

Vatwani was recognised for "his tremendous courage and healing compassion in embracing India's mentally-afflicted destitute, and his steadfast and magnanimous dedication to the work of restoring and affirming the human dignity of even the most ostracized," the Ramon Magsaysay Award Foundation said in its citation for the winner.

Vatwani, who is based in Mumbai, and his wife started an informal operation of bringing mentally-ill street persons to their private clinic for treatment, leading them to establish Shraddha Rehabilitation Foundation in 1988, aimed at rescuing mentally-ill persons living on the streets; providing free shelter, food, and psychiatric treatment; and reuniting them with their families.

Youk Chhang from Cambodia, Maria de Lourdes Martins Cruz from East Timor, Howard Dee from the Philippines and Vo Thi Hoang Yen rom Vietnam are other winners of the award.