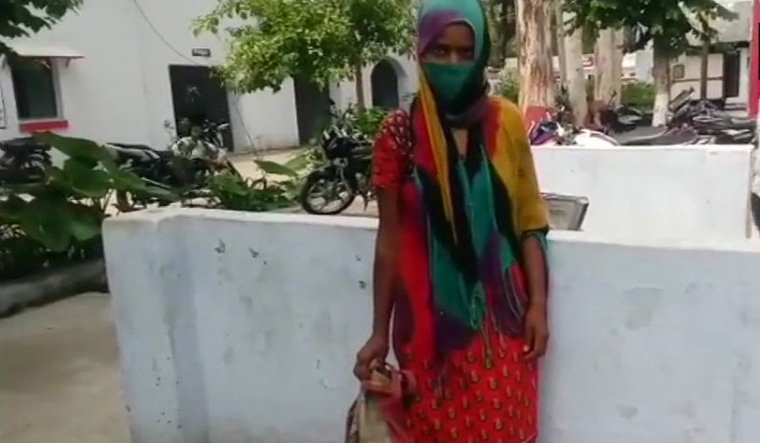 The victim in Amroha | ANI

Even as the Yogi Adityanath government in Uttar Pradesh has been reiterating its commitment to the security and protection of women, incidents of rape are refusing to die down in the state.

After the Unnao rape case, sexual violence in Uttar Pradesh is again in the news after a rape victim carried her aborted foetus to the police station at Hasanpur in the western Uttar Pradesh district of Amroha on Saturday to lodge a complaint.

And, shockingly, it was not the first incident of a rape victim carrying her dead foetus to the police.

The 19-year-old victim, along with her mother, arrived at the police station carrying the dead foetus in a bag. She alleged that she had been raped by a youth in her neighbourhood. She accused Manoj Kumar (22) of raping her in a nearby jungle at gunpoint. The accused threatened to eliminate her entire family if she revealed anything. So, the victim hid the incident from her family. However, when she became pregnant, her relatives learnt about the incident.

When Manoj learned about the victim being pregnant, he forcibly entered her house and forced her to take some medicines at gunpoint, which induced an abortion. After becoming aware of the incident, the victim's mother brought her to the police station.

According to the police officer at Hasanpur, Ajay Kumar, both the accused and victim are dalits and the foetus has been sent for forensic tests. Manoj is absconding though the police have registered a case against him.

A similar incident was reported about two months back in the western Uttar Pradesh district of Meerut, when a rape victim had carried her aborted foetus to the police station. She too had accused two of her neighbours, Mohammed Adil and Mohammed Hasan, of allegedly raping her when she was alone at home. In the Meerut case too, the accused had forced the victim to consume medicines forcibly, so that it would induce an abortion.