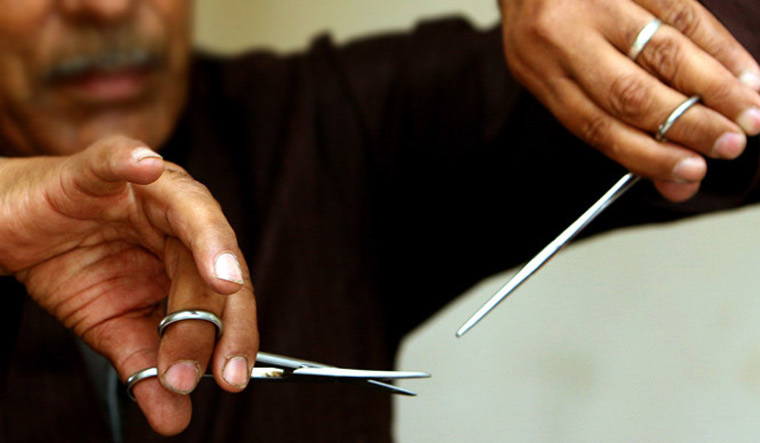 The practice of female genital mutilation resulted in serious violations of basic fundamental rights of the minor victims, says the petition | Reuters

The Supreme Court on Monday questioned the practice of female genital mutilation of minor girls in the Dawoodi Bohra Muslim community, saying it violates the bodily "integrity" of a girl child.

A bench headed by Chief Justice Dipak Misra was told by Attorney General K.K. Venugopal, representing the Centre, that the practice causes irreparable harm to girl children and needed to be banned.

He told the bench, which also had Justices A M Khanwilkar and D Y Chandrachud, that countries like the USA, the United Kingdom, Australia and around 27 African countries have banned this practice.

Senior advocate A.M. Singhvi, appearing for a Muslim group, said the matter be referred to a constitution bench as it pertained to the issue of essential practice of the religion which needed to be examined.

"Why and how should the bodily integrity of an individual can be part of the religion and its essential practice," the bench asked, adding the practice violated the "integrity" of a girl child's body.

"Why should anybody else will have any control over the genitals of an individual," it said.

During the brief hearing, Venugopal reiterated the Centre's stand and said that the practice violated various fundamental rights of the girl child and moreover, such kind of genital mutilation has serious repercussions on their health.

Singhvi, on the other hand, referred to the practice of male circumcision (khatna) in Islam and said that it has been allowed in all countries and this is the accepted religious practice and sought adjournment of the hearing.

The bench has now fixed the PIL filed by lawyer Sunita Tiwari on the issue for hearing in July 16.

Earlier, the apex court had ordered Kerala and Telangana to be made parties to a PIL that has challenged the practice of female genital mutilation of minor girls of the Dawoodi Bohra Muslim community.

It ordered that states like Kerala and Telangana, where Bohra Muslim community reside, should also be made parties to the litigation and issued notice to them as well. The states which are already party to the case are Maharashtra, Gujarat, Rajasthan and Union Territory Delhi.

The court had on May 8 agreed to examine the issues raised by Delhi-based lawyer Sunita Tiwari by saying that the practice of female genital mutilation was "extremely important and sensitive".

It had issued notices and sought replies from four Union ministries, including the Woman and Child Development, besides Maharashtra, Gujarat, Rajasthan and Delhi where Dawoodi Bohras, who are Shia Muslims, predominantly reside.

Tiwari, in her plea, has sought a direction to the Centre and the states to "impose a complete ban on the inhuman practice" of 'khatna' or "female genital mutilation" (FGM) throughout the country.

The plea has sought a direction to make FGM an offence on which the law enforcement agencies can take cognisance on their own. It has also sought to make the offence "non-compoundable and non-bailable" with provision for harsh punishment.

The ministries of Law and Justice, Social Justice and Empowerment have also been made parties to the plea which referred to various conventions of the United Nations, to which India is a signatory.

The practice of female genital mutilation resulted in "serious violations of basic fundamental rights of the victims who in these cases are minors," the plea said.

The FGM is performed "illegally upon girls (between five years and before she attains puberty)" and is against the "UN Convention on the Rights of the Child, UN Universal Declaration of Human Rights of which is India is a signatory", the plea said, adding the practice caused "permanent disfiguration to the body of a girl child".

"The practice of 'khatna' or 'FGM' or 'Khafd' also amounts to causing inequality between the sexes and constitutes discrimination against women. Since it is carried out on minors, it amounts to serious violation of the rights of children as even minors have a right of security of person, right to privacy, bodily integrity and the freedom from cruel, inhumane or degrading treatment," the plea said.

"It is a ritual performed on every girl child within the Dawoodi Bohra religious community without any medical reason and does not have any reference in the Quran.

"It violates the rights of the child and human rights. It also violates the Universal Declaration of Human Rights and is a crime in the Unites States of America under the Illegal Immigration Reform and Immigrant Responsibility Act of 1996 and now a crime in Australia and some other countries as well," it claimed.

"There is no law in India banning FGM or Khatna to declare it illegal," it added.