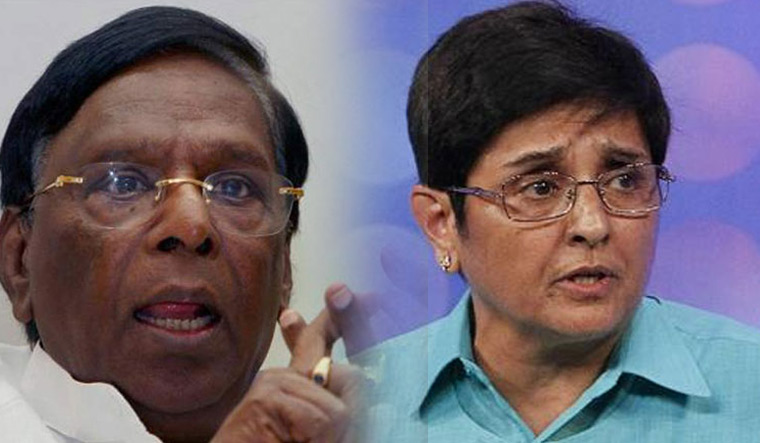 The Supreme Court’s order on the power struggle between the Aam Aadmi Party government in Delhi and Lieutenant Governor Anil Baijal came down as a blessing in disguise for Puducherry Chief Minister V. Narayanasamy, who is fighting LG Kiran Bedi day in and day out over governance. Tamil Nadu opposition parties, too, have pulled a lead out of the top court order, to remind Governor Banwarilal Purohit of his powers.

Bedi, who takes to hold review meetings and field visits, said, “The verdict is applicable just for Delhi.”

However, Narayanasamy, in a press conference on Thursday, warned, “If the LG’s interference continues and if she fails to act in consonance with the Supreme Court order, I myself will file a contempt petition.”

A day later, Bedi again took to Twitter to post an old video of Narayanasamy’s interview to a Tamil TV Channel, where he talks about Lt governor’s powers. Narayanasamy, a Union minister then had defended the interference of LG in government administration. Bedi said, "TV intv Honble CM of Puducherry gave as a Minister to @ThanthiTV —he had explained the status & responsibilities of LG vis a vis CM. It’s in Tamil..May c if U wish & help translate for others." She also tagged the prime minister, the home minister and Union Minister Ravi Shankar Prasad in her tweet. Though Narayanasamy seemed a happy man after the Supreme Court verdict, the turf war between the chief minister and the LG in Puducherry is not likely to die down in the near future.

In Tamil Nadu, opposition leader and DMK working president M.K. Stalin tweeted, immediately after the verdict, saying, “The Tamil Nadu governor should understand the Supreme Court verdict on the powers of a governor and act accordingly.”

In Tamil Nadu, the row over governor and the opposition parties began in October last year, after the state got a full-time governor in Banwarilal Purohit. Purohit was looked at as a man who would keep the ruling party in check when he took over. It all began when he set out from Raj Bhavan, to take stock of the implementation of central government schemes like Swachh Bharat. Purohit’s meetings in the presence of ministers, district collectors, revenue officials and other officers in the district continued on a spree until allegations linking him to a sex scandal in a university cropped up. The opposition DMK, wasted no time in taking on the governor saying, “He is crossing his constitutional limits.” The DMK took out black flag protests wherever the governor visited. At least 192 DMK cadres were arrested as the party went on with their black flag protests against the governor. Subsequently an FIR was registered against all the 192 under Section 7 (1), charging them with public disobedience.

A day later, the Raj Bhavan came out with a stern warning against the protesters saying, “The governor is free to visit all parts of the state and during such visits, district officials make presentations about the prevailing conditions and take delight in informing the governor about their schemes, programmes and achievements.” It also said strong action will be taken against those who obstruct the governor from discharging his duties. The statement said that anyone obstructing him will face seven years jail under Section 124 of the Indian Penal Code. Section 124 deals with criminal assault on governor with intent to restrain him from exercising his powers. Those found guilty will be sentenced to seven years imprisonment.

“Through this verdict, the apex court has upheld principles of federalism and cut the Lt governor to size. The judgement reiterates that power and authority rests with elected governments with very few exceptions. In a state like Puducherry, these exceptions are almost nil and yet we see Lt governor functioning in a manner which is ultra vires. In states like Tamil Nadu, the governor's role is purely ceremonial. Yet, a subservient state government and desperate Centre have combined to give the governor unconstitutional authority. We hope that this judgement serves as a timely reminder against all such gubernatorial misadventures,” says Manuraj Shanmga Sundaram, DMK spokesperson.

While Delhi and Puducherry chief ministers are happy after the verdict, in Tamil Nadu, it was the opposition which used to take on the governor. The AIADMK government in the state, which had even passed a resolution when Jayalalithaa was the chief minister, asking the Centre to take back the then governor Chenna Reddy, however, now chose to maintain silence.