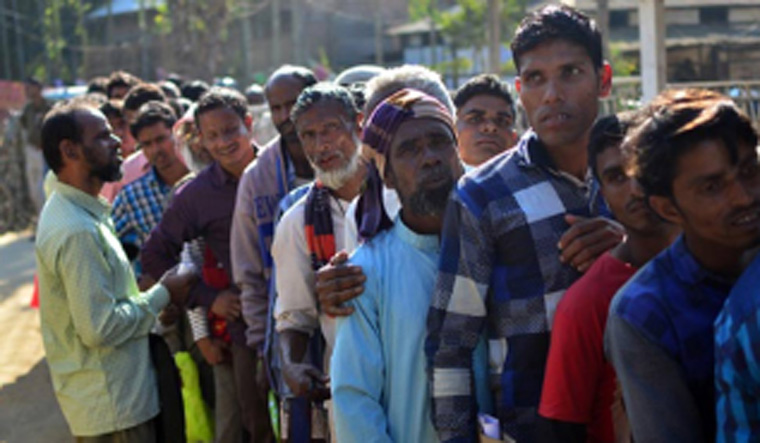 (File) A group of people waiting to register with the NRC

The biggest enumeration exercise that any Indian state has seen after independence is fast nearing completion with the complete draft of the National Register of Citizens (NRC) in Assam set to be published soon. The Supreme Court had fixed June 30 as the date for publication of the complete draft NRC, but in view of the devastating floods in Assam, work in three Barak Valley districts suffered for around 10 days. It is, therefore, all but certain now that the complete draft NRC will not be published on June 30 and will be delayed by a few days.

So far, there are no concrete answers to these valid questions. The only common thread running through all governmental and non-governmental organisations is one word: apprehension.

The BJP-led government of Sarbananda Sonowal, facing the toughest time of its tenure, is not sitting idle. The government had sought 150 companies of additional forces from the Centre to deal with any possible law and order problem following the publication of the complete draft of the NRC. As many as 85 companies of security forces are already deployed to ensure that no law and order situation arises in the state during the updation process, and so far, no untoward situation has arisen anywhere.

The Assam government has also sought the help of the North East Space Application Centre for proper mapping of the char (riverine) lands, where there are concentrations of Bengali-speaking Muslim peasants, so that extra security measures can be taken in those vulnerable areas. The Border Security Force (BSF) has been asked to step up vigil, so that no troublemaker can sneak into Assam from Bangladesh.

While the Assam government has also launched a massive awareness drive urging people not to panic if their names do not figure in the coming NRC list, as there is still scope for appeal, a section of people including former chief minister Tarun Gogoi—during whose tenure the NRC exercise began—has started to cast serious doubts on the accuracy of the NRC.

“I have my doubts regarding the accuracy of the soon-to-be-published complete NRC. But I hope that I would be proved wrong as every citizen of Assam wants a correct NRC,” Gogoi said. The three-term chief minister felt that those whose names would not figure in the final NRC should be declared as “stateless” and be deported in due time. It may be recalled that 3.29 crore people applied for inclusion of names in the NRC and 1.90 crore were included in the first draft, which was published on December 31 last year.

Meanwhile, the Office of the United Nations High Commissioner for Human Rights (OHCHR) has sought clarification from New Delhi about the fate of the individuals whose names will be excluded from the updated NRC. In an eight-page letter to External Affairs Minister Sushma Swaraj on June 11, the UN agency sought detailed information on the steps taken by the Centre to ensure that the substance and implementation of the NRC update complies with India’s obligations under international human rights laws and standards. “In particular, please provide details on steps taken to ensure that the NRC update does not result in statelessness or human rights violations,” the letter stated.

Expressing his utter surprise at the OHCHR’s letter, All Assam Student Union (AASU) advisor Sammujjal Bhattacharya retorted that a conspiracy has been hatched against the indigenous people of Assam by an international lobby and urged the government of India to give a befitting reply to the letter.

“Assam has been held hostage to the foreigners issue for the last 38 years, and we want to be free from this vexed issue once and for all,” he said and added, “I fear that these illegal migrants have some nexus with the international bodies.”

It seems that the politics of citizenship is not yet over and will linger on even after the publication of the final NRC. And yes, what about deportation of the declared or confirmed illegal migrants? Is the Assam government mounting enough pressure upon the Centre to come up with an action plan? Can New Delhi send the illegal migrants back to Bangladesh without a formal agreement with Dhaka? Or, is Dispur simply planning to put such people in detention centres? Time will tell.