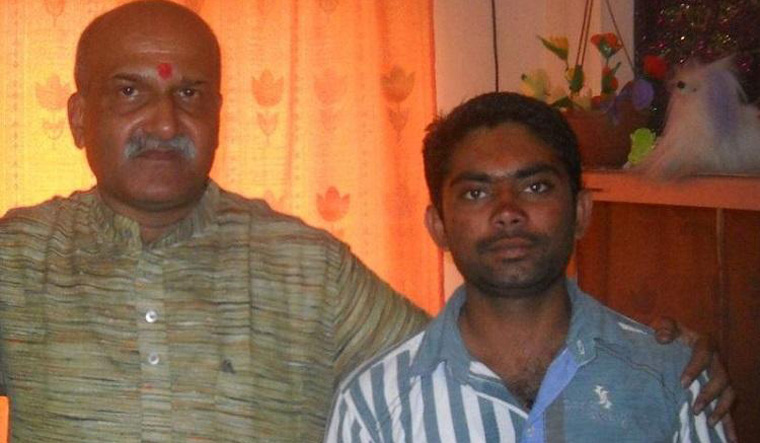 A file photo of Pramod Muthalik, founder of Sri Rama Sene, with Parashuram Waghmore, the main accused in the Gauri Lankesh murder case

The main accused in the murder of veteran journalist Gauri Lankesh has confessed to his crime, cited media reports quoting the Special Investigation Team (SIT) probing the crime.

Twenty-six-year-old Parashuram Waghmore, who was arrested early this week from Vijayapura district in north Karnataka, said he committed the crime to "save his religion". Waghmore, a Sri Ram Sene activist from Sindagi, a town near the Karnataka-Maharashtra border, was the one who pulled the trigger and killed Lankesh. "I was told in May 2017 I had to kill someone to save my religion. I agreed. I didn't know who the victim was. Now I feel that I should have not killed the woman," sources quoted Waghmore as confessing to the SIT, according to the Times of India.

Gauri Lankesh was shot dead by three assailants on a bike at the premises of her house on September 5. Waghmore has informed the SIT that he was brought to Bengaluru on September 3. The group had tried to kill her on September 4, but the mission had to be aborted since Gauri had already returned from work and was inside her house.

The trio succeeded in its attempt on September 5. "Gauri had stopped her car in front of the gate and was opening it from inside when I approached her. I coughed lightly and she turned towards me. I pumped four bullets into her," Waghmore has allegedly confessed. "We returned to the room and left the city the same night..." he said. Parashuram Waghmore was the last of the six suspects arrested in connection with the case.

The official also claimed that the same weapon was used to shoot Lankesh, and rationalists Govind Pansare and M.M. Kalburgi.