Thoothukudi: The inside story of how anti-Sterlite protest was crushed by bullets 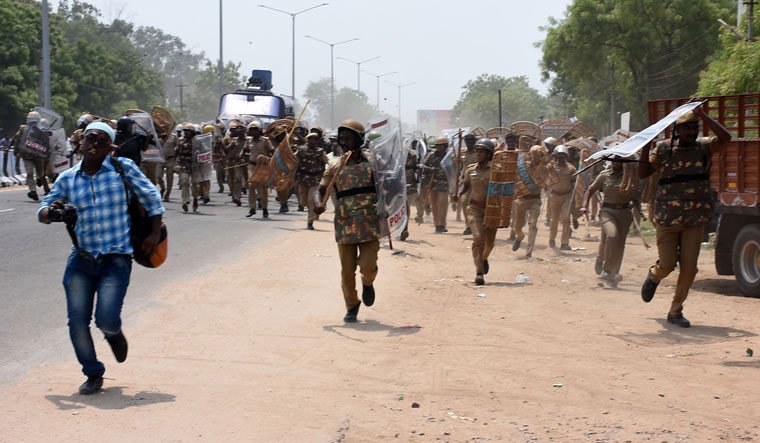 On the 100th consecutive day of their peaceful protests, over 20,000 villagers of Kumareddyapuram village reached the Collector’s office at Thoothukudi calling for the closure of Vedanta’s Sterlite copper smelter plant. Earlier in the day, a group of just 500 people had gathered near the VVT signal before it started swelling into several thousands. The protesters, both men and women, marched towards the collectorate shouting slogans and demanding the closure of the plant.

“There were three rounds of firing at the protest site. This was a clear attempt to dilute our protests and make Vedanta come back to Thoothukudi,” says Maria Thangam, one of the protesters, who was injured and back home in her Kumareddyapuram village.

For the first time in the history of Tamil Nadu, a peaceful protest has turned violent and taken nine lives. Though the protesters were angry at the inefficiency of the government in helping them, there were no signs of violence when it began, say the people who were part of the protest team.

Chief Minister Edappadi K. Palaniswami has ordered to set up a panel headed by a retired judge to probe into the shootout, and announced a compensation of Rs10 lakhs and government jobs for the next to the kin of the victims. However, the shootout and the visuals from the protest site have shaken the entire state.  In the video footage, shot at the protest site, the policemen were seen aiming at the protesters with high-profile guns and snippers. While police are allowed to shoot only below the knee during such violent protests, in this case, most of the protesters were hit by bullets on their mouth or chest.

Seventeen-year-old Venista was shot on her mouth. Sources say the police shot on her mouth, because she was quite vociferous during the protests. “It was a pre-planned murder. It was a cold blooded murder aimed at not just diluting the protests but also at curtailing them,” says T. Velmurugan of Thamizhaga Vazhvurimai Katchi. “On March 24, there were even big protests. But now police resorted to shootout,” he adds.

The rally from VVT signal to the collectorate was planned and announced well in advance, at least 20 days before, by the protest team. But Thoothukudi Collector N. Venkatesh issued orders imposing Section 144 only on Monday. As the people marched into the collectorate, the police fired teargas to disperse them resulting in a pitched clash between the protesters and the police. “They did this because we defied the ban,” says Maria Thangam.

Meanwhile, highly placed sources in the Tamil Nadu police say that the firing was inevitable. The police were forced to lathi charge and later open fire as the protesters turned violent, attacking the Sterlite staff quarters right behind the collectorate, they said.

However, the protesters have a different version to say. “It was intended to kill the organisers of our protests. The nine people killed are those who coordinated the protests. These are planned murders to make us give in,” says Anthony Rajangam, one of the protesters who was hurt on his shoulder.

“I didn’t go to the government hospital. I came back home as I am not severely injured. More than the wound, it is the filthy language used by the policemen and the way they chased us as if we are terrorists, that pained us,” he says.

“The protests which began peacefully turned violent only after the police started attacking us,” says Anthony.

With the violence and killings, Thoothukudi district has now been brought under police control, thus creating a palpable fear in the minds of the villagers in and around. Sources say that the police have been doing home-to-home visit since Tuesday evening to find if they took part in the protests. Even the government hospital where the protesters are getting treated was not spared. Visuals of the policemen allegedly attacking the people in the hospital have also gone viral on social platforms. “People fear violence in the night,” says Velmurugan.

Meanwhile, the number of deaths has also not been made clear by the state government. While Chief Minister Palaniswamy said nine people died, Governor Banwarilal Purohit’s statement said 11 people were killed. However, the exact number suspected to be much higher.