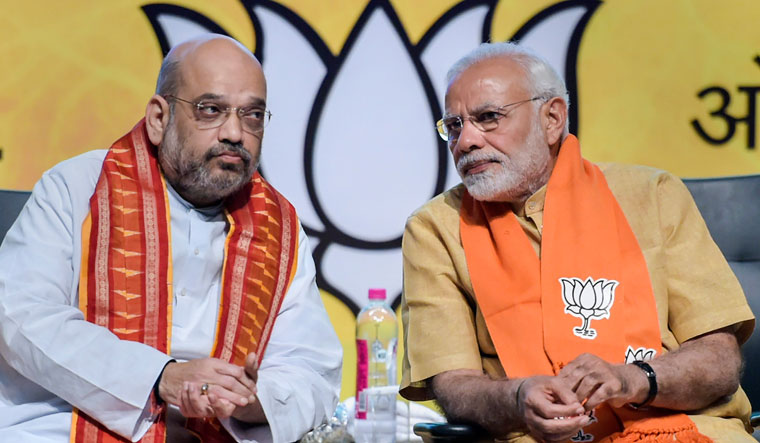 Prime Minister Narendra Modi and BJP National President Amit Shah at the concluding session of the National Executive Committee meeting of the party's all wings (morchas)' at Civic Centre in New Delhi, on Thursday | PTI

In the last four years of Modi regime, various government welfare schemes have benefited over 22 crore people across the country, according to BJP president Amit Shah. Now, in a run up to the 2019 Lok Sabha elections, the BJP will reach out to these beneficiaries to win them over as potential voters.

BJP chief Amit Shah tasked various morchas (frontal organisations) of the party to complete the work in the next one year. The BJP has dedicated morchas for groups like youth, women, farmers, OBCs, dalits, minorities, tribals. Addressing a meeting of these morchas, Shah gave them three tasks—to enrol new voters, engage with intellectuals at various levels and reach out to people at the booth level.

Modi and Shah plan to use these welfare schemes of the government for electoral gains. Shah said 22 crore have benefited through government schemes. So, when BJP workers engage with them, they would be most amenable to vote for the party.

Speaking in terms of numbers, the BJP in 2014 had got 17 crore votes across the country. The new plan to engage with 22 crore beneficiaries is part of the BJP strategy to get new voters in order to beat any anti-incumbency that may have crept in.

Prime Minister Modi also spoke during the day-long national executive meeting of the BJP morchas. “The aim of this government is India First. All the morchas should connect with people. Mahatma Gandhi's birth anniversary should be celebrated across the country in October,” Modi said.

He also hit out at the Congress, saying dynastic politics was being rejected by the people of the country, and they were instead rewarding those who were working for them.

Modi also spoke about various government schemes which have benefited the people.

As Modi government completes four years on May 26, the BJP will launch several programmes to highlight the achievements of the government.