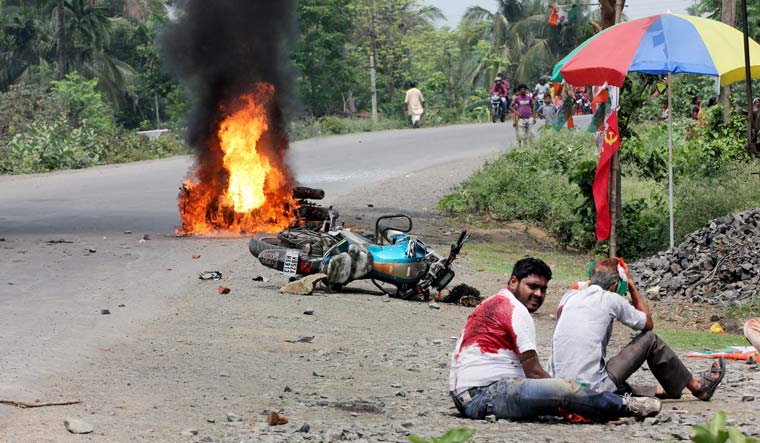 People injured in poll violence sit by the side of a road as a vehicle is set on fire by locals during panchayat polls, in Nadia district of West Bengal | PTI

Opposition parties in West Bengal slammed the State Election Commission for "failing" to conduct the rural polls in a free and fair manner and accused the ruling Trinamool Congress of letting loose a reign of terror which led to the killing of at least 12 people during the polling.

The Trinamool Congress has termed the allegations "baseless and concocted".

Union Minister and BJP leader Babul Supriyo tweeted, "It is for the world to see how TMC lets WB's Maa Maati Manush suffer in utter chaos. Bengal gets wounded and sheds blood every time TMC goons brutally attack the state's democracy and peace. Dreadful visuals of the Panchayat Polls prove just that."

State BJP chief Dilip Ghosh, who along with a party delegation met Governor K. N. Tripathi, claimed that more than 20 people have died in violence in the rural polls.

"Democracy has ceased to exist in West Bengal. The situation is such that the state is inching towards President's Rule. We will inform the Union government about the ground reality in the state," he said.

The Left Front which held a three-hour demonstration outside the SEC office in Kolkata protesting against the violence, said the election body had failed to provide security to the people.

Widespread violence during the panchayat polls in West Bengal left at least 12 people dead and 43 injured, as 73 per cent of the electorate turned out to cast their vote.

"This kind of violence is unprecedented. The SEC is just a puppet in the hands of the TMC-led state government. State Election commissioner A.K. Singh even refused to meet us," Left Front chairman Biman Bose said.

However, the ruling TMC dismissed the allegations as "baseless and concocted", and said the polls have been peaceful except for a few isolated incidents.

"There have been one or two isolated incidents. The administration has taken steps in all the cases. We have seen elections during the Left Front rule when we used to witness bloodbath and death," TMC secretary general Partha Chatterjee said.

He lauded the SEC and the state administration for conducting a peaceful polling and accused the BJP and the CPI(M) of trying to foment trouble in various parts of the state during the polling process.

"Every death is unfortunate. But If you go by statistics, the number of deaths this time is much less than that last few (panchayat) elections," Chatterjee said.