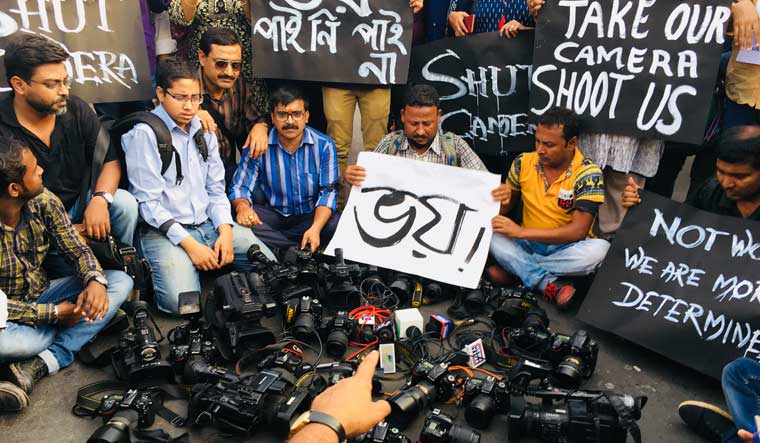 (File) Photojournalists and journalists during a protest against the assault of a lensman by TMC supporters, in Kolkata. The protest was held on April 11 | Salil Bera

The International Press Institute (IPI), a global network of editors, journalists and media executives, on Wednesday vehemently condemned attacks on journalists in West Bengal, and demanded that the state government take action against those responsible for these assaults, and ensure the safety of journalists.

Several journalists, including women reporters, were attacked on Tuesday and held against their will by political activists while covering the filing of nomination papers for local elections in West Bengal. According to media reports, seven Anandabazar Patrika reporters and photojournalists were among those who were attacked. A woman journalist was reportedly confined in a slum for over an hour. The TMC and the BJP workers allegedly assaulted the scribes.

These incidents happened in several districts of the state, and despite police complaints, no arrests have been made so far.

Condemning the attacks, IPI head of advocacy Ravi R. Prasad urged the government of West Bengal to immediately arrest those responsible for the attacks.

“This appears to be a well-planned act of violence against journalists”, he said. “The government should investigate and bring to justice those who masterminded these assaults and take action against police officers who did not investigate the complaints.”

India has become an extremely dangerous place for journalists to work, according to the statement.

While incidents of assaults have become rampant, many scribes have lost their lives in the line of duty.

According to IPI’s Death Watch, seven journalists were killed in India in 2017, while at least three have been killed in the first three months of 2018 alone. Besides murders and assaults, journalists also face threats and online abuse. Investigations are slow and in many cases no arrests have been made.

“We would like to see swift action in the investigation of murders, too”, Prasad added. “The government of India should take steps to not only strengthen protection of journalists, but also to bring to book those responsible for the murders, assaults and harassment of reporters and editors in the country.”

IPI demands that the cases of murder and assault of journalists be probed by an independent body as the Central and state law enforcement and criminal investigation agencies in India are slow in their investigations.