'Death penalty will only silence victims of child sexual abuse' 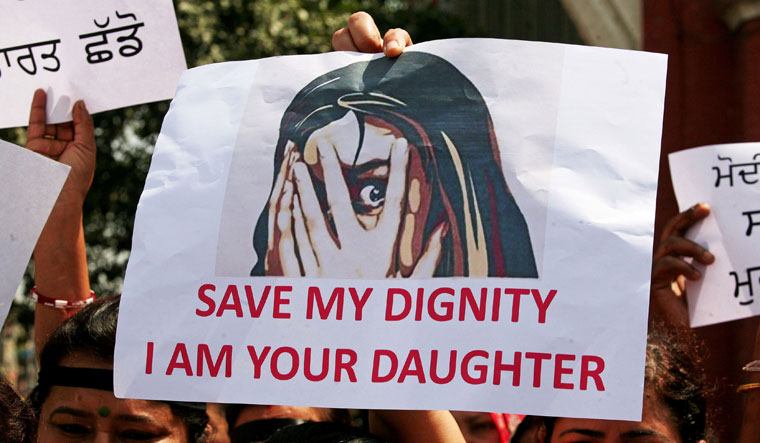 People participate in a protest against the rape of an eight-year-old Bakarwal girl near Jammu, and a teenager in Unnao, Uttar Pradesh, in Amritsar | Reuters

“How many times must a three-and-a-half-year-old recount the trauma she went through? Our system is such that a child who barely knows what she ate yesterday is asked what she went through six months ago... after all those months, defense lawyers ask her 'where did the uncle touch', 'where did it hurt',” an emotional father, a daily wager in Delhi, said, while recounting his ordeal in getting justice for his minor daughter, a victim of child sexual abuse.

“Death penalty is not a solution. That would be too easy an end,” the father said at a presser organised by civil society members who are opposing the ordinance allowing death penalty for those convicted of raping children under 12 years of age.

The ordinance has come in the backdrop of the rape and murder of an eight-year-old girl in Kathua.

In cases of child sexual abuse, the victim's father implored, convicts must be given “life imprisonment, and made to suffer”.

Another parent, a single mother, whose minor daughter had been abused sexually by the father, said she did not want death penalty for him. “I am a single mother. I need some financial support to take care of my daughter. If my husband is given death penalty for the crime, then I have no hope of getting any money. A life term for him in jail might mean that some of the money that he earns in the jail can be used for the family,” she said.

In most cases of child sexual abuse, the relationship between the victim and the perpetrator is complex. The victims and survivors are seeking “accountability, acknowledgment, and apology by the perpetrator for the abuse itself and the harm caused to them," said Anuja Gupta, executive director, Delhi-based RAHI Foundation—a centre for women survivors of incest and child sexual abuse.

“In such a scenario, even reporting the abuse to the police is a much further step. They do not want their perpetrator to go to jail, let alone face death,” she said. Death penalty will only silence the victims further; they are unlikely to “disclose abuse or testify” against the perpetrator, she added.

Death penalty, it is being argued, will also endanger the child victims as the perpetrator may not want the child to testify in court or disclose the abuse.

Those present at the conference also cited figures that display the poor implementation of the POCSO Act—five years after the law came into force, the conviction rate for child rape stands at 28.2 per cent and pendency at 89.6 per cent. “Special courts (under POCSO) are not exclusive, neither are the special public prosecutors,” said Justice A.P. Shah, former chief justice of Delhi High Court and former chairman of the Law Commission of India. Death penalty, said Shah, was a populist measure.

Bharti Ali, who heads the NGO, HAQ: Centre for Child Rights, said procedural safeguards for children are rarely complied with. “Trials in sexual crimes are meant to be held in-camera. This has been a legal requirement way before the POCSO Act came into force. Yet, we see many courts flouting the norm even today,” said Ali.

“The move to go-ahead with death penalty is a tool to divert attention from the fact that reforms are needed in the criminal justice system,” said Vrinda Grover, noted human rights lawyer.

Under the Criminal Law Amendment Act, 2013 (passed in the wake of the Nirbhaya case in December 2012), it was said all rape trials would be finished in two months, and in the case of children, in three months. “But there are barely any trials that finish in that time,”she said.

Also, provisions such as compensation, rehabilitation for survivors, special forensic kits and additional forensic laboratories remained on paper only.

Anup Surendranath, Centre on Death Penalty, National Law University Delhi, said only 14 countries in the world had the clause for death penalty in child rape cases. “There is enough evidence to suggest that it does not serve as a deterrent. Besides, in a country where there instances where the police was under-staffed and did not even have someone to accompany the accused from the prison to the court, what good is death penalty going to serve?,” he said.